Jon Jones, the longest reigning light heavyweight champion in UFC history, has announced that he is officially vacating his world title as the controversial star opens the door to a move to the heavyweight division.

The 33-year-old Jones is widely regarded as one of the most successful fighters in mixed martial arts history, never once suffering what could be described as a ‘legitimate’ loss inside the Octagon. He could soon be set for a whole new array of competition, however, after he revealed in a series of late-night tweets that he has informed the UFC that he is officially relinquishing his world title – and his next stop could be the heavyweight division.

Jones last competed early this year where he won a close but unanimous decision against Dominick Reyes. Immediately after, Jones wondered aloud about the possibility of a move to heavyweight to fight Francis Ngannou – but was apparently put off by the UFC’s lack of enthusiasm for the negotiations, and stated in a tweet several months ago that he was considering dropping his title.

However, he made that official late Monday night – and also said that he had discussed the matter with the UFC, with a path set to be cleared for him to make the long-awaited division switch.

Just got off the phone with @Ufc, today I confirm that I’m vacating the light heavyweight championship. It’s officially up for grabs. It’s been an amazing journey, sincere thank you to all my competition, Ufc and most importantly you fans.

Just had a really positive conversation with @Ufc. Sounds like there will be negotiations for my next fight at heavy weight. All good news, the weight gaining process begins.

“Just got off the phone with UFC, today I confirm that I’m vacating the light heavyweight championship,” Jones wrote on Twitter. “It’s officially up for grabs. It’s been an amazing journey, sincere thank you to all my competition, UFC and most importantly you fans.

“Just had a really positive conversation with UFC,” he continued in a later message. “Sounds like there will be negotiations for my next fight at heavyweight. All good news, the weight gaining process begins.”

Jones also indicated that he would award a prize of $100,000 to anyone who could win six UFC world title fights in succession, after stating that he doesn’t believe that anyone will equal his record-breaking exploits in the UFC’s light heavyweight fold in his lifetime.

He first captured the world title in 2011 when he was drafted in to replace then-teammate Rashad Evans for a short notice title bout against Mauricio ‘Shogun’ Rua – at which he became the youngest champion in UFC history. He defended the title eight straight times before being stripped of it for being involved in a hit and run road accident.

He would reclaim the belt by beating ole foe Alexander Gustafsson for a second time in late 2018.

Seriously, I challenge you guys to go out there and be great too. It’s going to be awesome watching with that cheeseburger in my hand

It would’ve been fun but have you seen the size of the guys in my family? I really do believe putting on a little extra weight is going to bring out my true genetic/athletic potential. https://t.co/K7G7bwhZZR

Jones now indicates that his future lies at heavyweight, where a range of interesting fights remain open. The next world title fight is almost certainly going to be between Stipe Miocic and top contender Francis Ngannou, leaving Jones ample time to adjust his strength and conditioning program to put the additional mass on his frame that the level of competition will require.

And as he says, with his brothers Arthur and Chandler recognized star athletes in the NFL, the move could go one further step to unlocking his undeniable athletic potential. 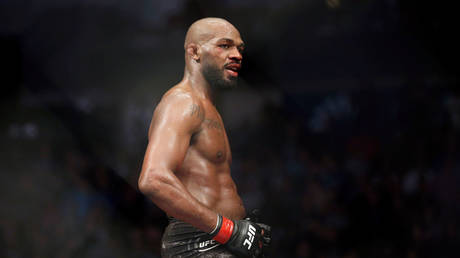 How to get BANNED Fortnite on iPho...