Close
Trending News
HomeSport‘It’s just not the same without the people’: Returning ace Andy Murray admits he misses the fans as he prepares for US Open

‘It’s just not the same without the people’: Returning ace Andy Murray admits he misses the fans as he prepares for US Open

‘It’s just not the same without the people’: Returning ace Andy Murray admits he misses the fans as he prepares for US Open

British tennis star Andy Murray is continuing his preparation ahead of the US Open next weekend, but admitted that he misses the presence of the fans as he returns to action.

Murray is currently competing at the Western & Southern Open, the warm-up event ahead of the start of the Grand Slam tournament in New York next week. And the Scot admitted that he’s isn’t back to full match sharpness as he works his way back from a hip injury that threatened to derail his top-level tennis career.

He hasn’t played competitively since last November, but has eased his way back with a series of exhibition match appearances and is now looking to work his way back to top-level action.

“I’ve been practising with Dominic Thiem, Andrey Rublev and Karen Khachanov. Those guys don’t hold back. It’s a bit of a different speed to what I’ve been used to. I felt a little off the pace but I’m feeling quite good on court in terms of my hip.

“That was really all I wanted. I wanted to get to the U.S. Open feeling pretty pain-free so that I could enjoy playing in a Grand Slam again.”

While Murray continues to battle back from a potentially career-ending injury, the three-time Grand Slam winner said his return to elite-level action at the US Open will be a little diminished as a result of the tournament being played in front of no spectators due to the ongoing COVID-19 pandemic.

“It’s just going to be different playing in front of no fans. I kind of felt that a little bit yesterday. It’s nice walking through to practice not getting stopped, but then the atmosphere is just not the same without the people,” he said.

Murray will take on Frances Tiafoe in the opening round of the Western & Southern Open. After the conclusion of that tournament, he will join the field for the US Open, which gets underway on Aug. 31. 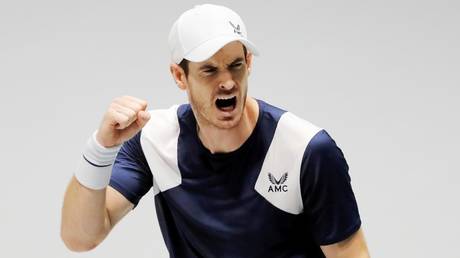