Manchester City forward Raheem Sterling shrugged off a barrage of online abuse after starring against former club Liverpool as the newly-crowned Premier League champions were humbled 4-0 by the team they deposed.

In their return to action after clinching a first Premier League title in 30 years last week, Liverpool suffered a chastening night as they were routed by a rampant City.

The home players extended their guests the courtesy of a guard of honor before the match, but the hospitality ended there as City ripped through Jurgen Klopp’s men with three first-half goals, the first of which came from the superb Kevin de Bruyne who scored from the penalty spot after Joe Gomez had dragged down Sterling.

Sterling himself was on target for the second, while midfield starlet Phil Foden finished a slick move on the stroke of half-time as City went in cruising at the break.

Alex Oxlade-Chamberlain slid the ball into his own net from Sterling’s drive in the second half to complete the rout, and while Liverpool had hit the post early on through Mohamed Salah’s effort, they were spared more embarrassment when substitute Riyad Mahrez’s late strike was ruled out for a handball in the build-up.

For former Liverpool man Sterling it was a chance to gain personal revenge against Reds defender Gomez after the pair clashed at Anfield earlier in the season, which spilled over into a bust-up while on England duty which saw Sterling temporarily dropped from the team.

Sterling signalled his delight at Thursday’s result with a telling Instagram post of himself celebrating his goal while Gomez was seen kneeling in the background.

Sterling also took to Twitter to shrug off a wave of online insults from fans of his former club, reminding them that “it’s just a game.”

“Wow so much abuse in here (laughing faces), its just a game people, you win some, you lose some,” wrote the 25-year-old ace – adding a cheeky follow-up post which read: “but still happy to win it tonight. Have a good night FT (football Twitter)”.

Wow so much abuse in here 😂😂😂 its just a game people, you win some, you lose some 🤷🏾‍♂️

(but still happy to win it tonight 👀😅 have a good night FT 🤟🏾) pic.twitter.com/SHc6n1ZFR3

In his post-match interview with Sky Sports, Sterling was gracious in victory over the team he left for City in acrimonious circumstances in 2015, hailing them as “brilliant” for their title-winning form this season.

“They’ve been brilliant all year, we knew we had to go out there strong. We started really well, credit to the boys,” Sterling said.

“We knew we were behind, we knew we were disappointed we lost some games we shouldn’t have lost. We had a test to make a point and I think we did brilliantly.”

The defeat was only Liverpool’s second of the Premier League season as they sit 20 points clear of City in the table.

It may, however, damage their chances of reaching a symbolic haul of 100 points, as the Anfield club stands on 86 points with six games to play.

Liverpool boss Klopp appeared tetchy after the game, dismissing suggestions that the title celebrations had taken their toll on his team.

“If you want to lead the story in the direction that we were not focused on that game, then do it,” the German told Sky Sports.

“I saw a brilliant attitude. I saw fight. We didn’t behave like somebody who became champions a week ago.

“If there is a team in the world that can smash us like this, it is probably City – but we will come again.” 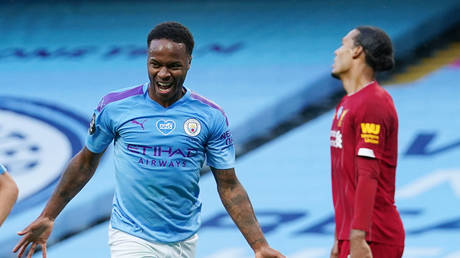