UFC middleweight champion Israel Adesanya says “homophobia” is behind the criticism over his celebration in which he ‘dry humped’ rival Paulo Costa after finishing him at UFC 253 on Fight Island.

‘The Last Stylebender’ produced a dominant display to overpower Costa, culminating with a brutal counter combination to drop the Brazilian before finishing him with a ground-and-pound barrage.

As Costa remained curled up and dazed on the canvas, Adesanya thrusted at him from behind as he celebrated.

The gesture divided opinion, but Adesanya has now suggested “homophobia” may be the cause of some of the criticism he has faced.

“I couldn’t give a f*ck what they think to be honest. I didn’t even think about it. I didn’t even plan it. It was just justified,” the Nigerian-born New Zealander told MMA Fighting.

“Like you know when you’re on Call of Duty and you smoke someone with a head shot and then you go over them and then press circle, down, up, down, up, kind of tea bag them. That’s kind of what I did.

“What it is [the criticism], is homophobia. People are just mad, ‘Why are you doing that, you’re not a man’, because they feel inadequate. Questioning their own sexuality.”

👑 @Stylebender is the undefeated king of the middleweights.

Adesanya extended his unbeaten record to 20 contests with his win over Costa, handing the Brazilian the first loss of his 14-fight professional career.

Bad blood had simmered online in the months leading up to the fight, and while things started with a serene first meeting when the pair bumped into each other on Fight Island in Abu Dhabi, tensions had flared at the weigh-in when Costa threw a white judo belt at his rival in a gesture of contempt at his grappling skills.

Aside from Adesanya’s ‘humping’ gesture he also exchanged insults with Costa’s corner after the bout, making a crude towards one member of the team.

“[Costa] said so much sh*t to me leading up to the fight, insulted me in so many different ways,” Adesanya added to MMA Fighting.

“That was pretty much a second after the fight was over and you expect me to be gracious? Are you f*cking kidding me?

Costa only appeared to find out about the ‘humping’ incident later on, upon which he took to social media vowing vengeance against Adesanya and branding him “human trash”.

One person to defend the 185lbs king was women’s fighter-turned-pundit Angela Hill. She told media including RT Sport on Fight Island: “That was funny. I mean like, why be mad about that? The dry humping, there wasn’t any penetration.

“He didn’t actually, like, smack him with anything. It was miming, he was doing aggressive miming.” 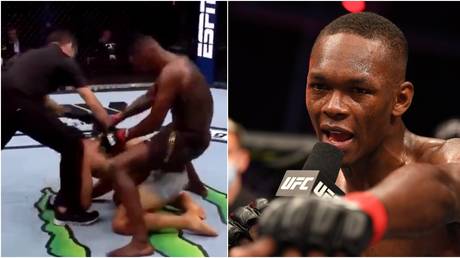