Khamzat Chimaev’s appearance in the UFC’s official welterweight rankings raised eyebrows among fans and media members alike, but the Chechen-born Swede has a very different view, saying that his ranking position is too low.

Chimaev is undefeated at 9-0 and has won all three of his fights inside the UFC octagon since joining the promotion in the summer.

But those wins have all come against unranked opposition, with only one of them actually occurring in the 170-pound welterweight division, and even that victory came against a fighter making his UFC debut on short notice.

It meant that some were unconvinced when the oft-criticized UFC rankings listed Chimaev as a new entry at No. 15 in their welterweight list.

But, while some are of the view that the undoubtedly-talented Chimaev’s inclusion in the rankings is premature, the fighter himself has a markedly different view.

The uber-confident Chimaev responded to a tweet suggesting that he was set to be installed as the UFC’s No. 15-ranked welterweight in the world, posting, “It’s bullsh*t, I’m number one. I’m a champion.”

Interestingly, there has been virtually no comment from anyone else in the UFC welterweight division, suggesting the top fighters at 170 pounds would like to see Chimaev tested against top opposition before giving their rival assessment of the newcomer.

That champion mindset has helped take him through his first nine fights without defeat. But his upcoming opponent looks set to provide an acid test for “The Wolf’s” credentials as a championship-level fighter.

Leon Edwards is officially ranked at No. 3 in the welterweight division, and is riding an eight-fight winning streak that is second only to reigning champion Kamaru Usman in the 170-pound class.

It means that Chimaev’s confidence, and the UFC’s apparent willingness to push him before he’s proven himself against world-class opposition, will be tested in a sink-or-swim matchup against Edwards on Dec. 19 in Las Vegas.

Will Chimaev prove the UFC’s faith in him is well-founded, or will Edwards show the talented newcomer that there are, as so many fighters like to say, “levels to this game” and hand him his first career defeat? We should get our answer on Dec. 19. 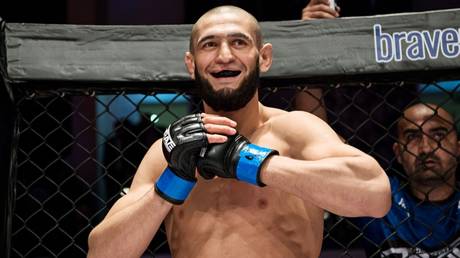