Bizarre footage from Flushing Meadows has shown the terrifying impact of the freak storms in the US, where play was called off as the former Hurricane Ida battered a court despite the roof being closed.

Show court the Louis Armstrong Stadium was drenched during a downpour despite its state-of-the-art cover, causing most fans to flee and play between former finalist Kevin Anderson and 11th seed Diego Schwartzman to be stopped twice in conditions the Argentinean described as “crazy”.

The concerns of the stars about a slippery surface were relatively minor concerns compared to the situation locally, with New York’s subway service suspended, trees falling and ticket-holders attempting to navigate a way back to their vehicles.

Hurricane Ida pummeled Louisiana over the weekend with winds of 150mph, causing a trail of devastation that included deaths and a million people being deprived of electricity.

Think the @usopen might have to make some slight improvements to Louis Armstrong Stadium’s roof #Tornado pic.twitter.com/KlscX9Rj8e

Fans reportedly received warnings telling them: “This is a dangerous and life-threatening situation.

“Do not attempt to travel unless you are fleeing an area subject to flooding or under an evacuation order.”

Darren Cahill, the coach of top contender Simona Halep, watched the broadcaster he was working with strip down to his pants in a desperate attempt to dry off between courts.

“Just confirming that this was my partner in the booth tonight, Jason Goodall, shedding his suit and shoes to brave the walk from Armstrong to Ashe Stadium during the storm,” said the Australian who has guided the likes of Andre Agassi.

“The chaos was real as not a single person thought [Goodall peeling off] was weird.”

Play was suspended for half an hour in the first set and, later, during the tie-break.

Just confirming that this was my partner in the booth tonight, Jason Goodall shedding his suit and shoes to brave the walk from Armstrong to Ashe stadium during the storm.

The chaos was real as not a single person thought it was weird 😂 https://t.co/bQ7SAFJ6yK

“It was very difficult before the match,” said Schwartzmann, whose audience included film star Ben Stiller after the mid-match change of venue.

“It’s been crazy weather. I wanted to finish today, not tomorrow.”

“At first I thought it was the crowd, just people talking on the back seats,” said the controversial Greek.

“I just realized it was not the crowd, it was the rain. Just a lot of noise coming from up there… I do have a bed here, so I might have a sleepover.”

Schwartmann and Tsitsipas are both due to play in the third round of the Grand Slam on Friday. 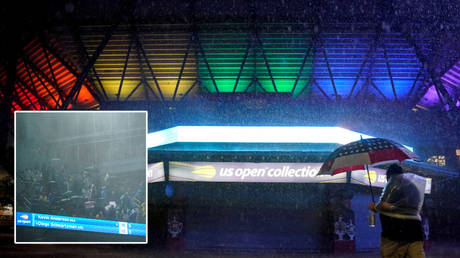 Why the PS5 redesign could actuall...