‘It’s been a strange year’: Novak Djokovic admits to ‘mixed emotions’ after claiming ATP’s world No. 1 crown for 2020

‘It’s been a strange year’: Novak Djokovic admits to ‘mixed emotions’ after claiming ATP’s world No. 1 crown for 2020

After arguably the most turbulent year of his career, Serbian tennis ace Novak Djokovic was crowned the ATP’s 2020 world No. 1 in London, but admitted that he had “mixed emotions” about his year in the sport.

Djokovic was presented his ATP No. 1 trophy at the Nitto ATP Finals as he officially finished 2020 as the world’s top tennis player for the sixth time in his glittering career.

His achievement saw him equal the mark set by his boyhood hero, American Pete Sampras, and left him feeling humbled after an at-times controversial year that was dominated by the ongoing COVID-19 pandemic.

“It’s been a strange year for all of us with a six months’ gap for all of us. We restarted the season in August, and I continued where I left off before lockdown and had a terrific run. I’m very pleased with the way things went.

“I have to say a huge thank you to my team for supporting me in the hard times and trusting me. This is the crown for all achievements in the year and it’s unreal that I’ve managed to finish the year at No. 1 for a sixth time.”

Djokovic courted controversy after insisting on plowing forward with his Adria Cup event, which led to a string of positive COVID-19 tests for a number of players, their wives and coaches.

It led to widespread criticism of the Serbian star, which only continued at the US Open, when he struck out at a tennis ball, which hit a line judge in the throat, leading to Djokovic’s disqualification from the tournament.

But, despite the controversy, Djokovic’s form on-court hasn’t suffered. He won the 2020 Australian Open to claim his eighth title Down Under, and reached the final of the French Open at Roland Garros.

He also captured his fifth Dubai Tennis Championships title and registered his 35th ATP Masters 1000 title at the Cincinnati Masters to equal Rafael Nadal’s record for the most ATP Masters 100 titles.

“Obviously I am super proud of it, but I have mixed emotions because of what is going on in the world,” said Djokovic, whose world No. 1 ranking came despite him losing all of the ranking points he would have earned at the US Open as a result of his disqualification.

“I can’t be ignorant to that, although I have achieved one of the biggest goals in sport. I feel for many people in the world going through hardship and my heart goes out to them.” 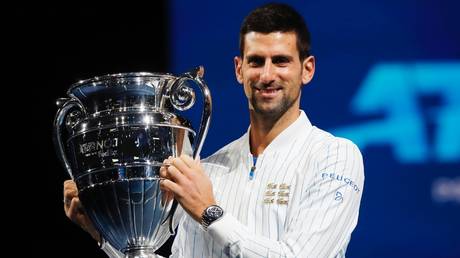