It seemed rather appropriate that Hamilton would equal German legend Schumacher’s tally in Germany, as he crossed the finish line first at the circuit that saw “Schumy” claim five victories in his stellar career.

After the race, Hamilton admitted the historical significance of his win only became apparent after he had crossed the finish line.

Schumacher’s son, Formula 2 racer Mick, presented the Briton with one of his father’s red helmets from his second stint in F1 with Mercedes as he congratulated the Englishman on his record-equaling performance.

“Congratulations and this is on behalf of all of us. A great achievement, really,” said Schumacher Jr.

“Thank you so much, it’s such an honor,” said Hamilton.

“I don’t even know what to say. When you grow up watching someone you generally idolize them, you know, really just in terms of the quality of the driver they are but what they are able to continuously do, year on year, and race on race, and week on week.

“Seeing his dominance for so long, I don’t think anyone and especially me didn’t imagine I’d be anywhere near Michael in terms of records. So it’s an incredible honor and it’s going to take some time to get used to it.”

Hamilton’s win extended his championship lead to 69 points over Mercedes teammate Valtteri Bottas, who was forced to retire from the race.

With just six rounds remaining, it means the world title seems to be almost within Hamilton’s grasp. 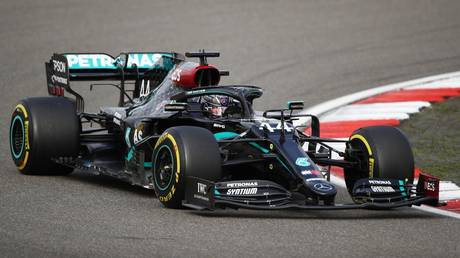