Close
Trending News
HomeSport‘It’s an evil world we live in’: Arsenal fans angry as Gunners splash out on Willian signing, just days after LAYING OFF 55 staff

‘It’s an evil world we live in’: Arsenal fans angry as Gunners splash out on Willian signing, just days after LAYING OFF 55 staff

‘It’s an evil world we live in’: Arsenal fans angry as Gunners splash out on Willian signing, just days after LAYING OFF 55 staff

Arsenal have secured the signing of former Chelsea winger Willian on a three-year deal, but the arrival of the Brazilian hasn’t been universally welcomed by the club’s fans, who remain angry after the layoff of the club’s staff.

The 32-year-old joins Arsenal on a free transfer after failing to agree on a new long-term contract with Chelsea, but his arrival at the club is far from a cheap acquisition, with the player’s contract expected to be a sizable one.

Willian netted 63 goals in 339 appearances for Chelsea after his arrival at the Premier League club from Russian side Anzhi Makhachkala in 2013. He won two Premier League titles with the Stamford Bridge club, and will be expected to make the Gunners a more potent attacking threat next season as he joins a youthful squad ahead of the 2020/21 campaign.

“I believe he’s a player that can really make a difference for us,” Arsenal manager Mikel Arteta told the club’s official website.

“We have been monitoring him for the past few months, we had a clear intention to strengthen in the attacking midfielder and the winger positions (and) he is a player that gives us a lot of versatility.

“I have been really impressed with all the talks I have had with him and how much he wanted to come.”

With the club adding Willian’s considerable salary – rumored to be around $288,000 a week – to their wage bill, plus their ongoing talks over a new contract for star striker Pierre-Emerick Aubameyang, the signing hasn’t gone down well with some Arsenal fans, with some fans taking to Twitter to articulate his disgust at the club’s recent actions after they announced the layoff of 55 members of the club’s staff earlier this month, just after their FA Cup win secured a financial bonanza from qualifying for the UEFA Europa League.

“Those 50 Arsenal employees that were made redundant were most likely Arsenal fans,” one fan tweeted. “So not only did they lose their dream jobs, but now they’re gonna have to watch Willian play for their club on wages created from their sackings. It’s an evil world we live in.”

“Imagine sacking your staff to fund a free transfer,” said another, while a fellow fan continued that train of thought by replying “Sounds even worse when that free transfer is a 32-year-old Willian.” 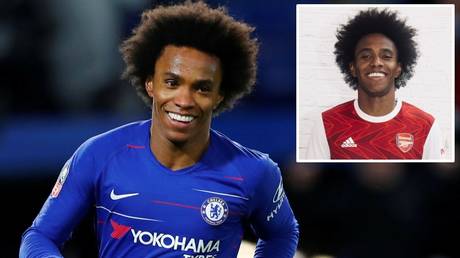