‘It’s a no-brainer, communism isn’t for America’: UFC star Masvidal teams up with Trump Jr for ‘Fighters Against Socialism’ rally

‘It’s a no-brainer, communism isn’t for America’: UFC star Masvidal teams up with Trump Jr for ‘Fighters Against Socialism’ rally

The welterweight contender and Trump supporter took part in a bus tour across Florida, where he and the president’s eldest son spoke at several events in Tampa, Orlando and Miami.

The 35-year-old shared a clip on his Instagram Stories of an interview he did with Fox News as part of the tour, in which he said: “It’s a no-brainer socialism and communism is not for America.”

“Awesome bus tour around Florida with the legendary @gamebredfighter talking the perils of socialism and communism,” he wrote.

“Jorge’s family story is an incredible one and he gets what the democrats plan is and know where that leads. It’s an honor to be in the fight with him.”

Both men spoke at several events on the tour, with Masvidal introducing Trump Jr. and using his father’s “America First” slogan.

This is him introducing ‘The Don Jr’ pic.twitter.com/7fViIogmni

“And I’m here to tell you Latinos are not looking for a handout, that’s for sure. Latinos don’t want free stuff, we want freedom. We want opportunity.

“We want to know that if we work hard enough and sacrifice we too can provide for our families and get our piece of the American dream.”

The final rally of the day was held at the American Top Team facility in Coconut Creek, where the gym paid tribute to both speakers.

Masvidal, whose father is from communist Cuba, isn’t the only UFC fighter to be close to the Trump family in the run-up to the election.

Fellow welterweight Colby Covington is known for being an outspoken Trump supporter and for wearing a “Make America Great Again” hat during press conferences.

Last month, he was personally called by the president, who offered him congratulations after beating Tyron Woodley.

Masvidal is 35-14 in MMA, having most recently lost to Kamaru Usman via unanimous decision in July, failing to take the welterweight belt off him in the process. 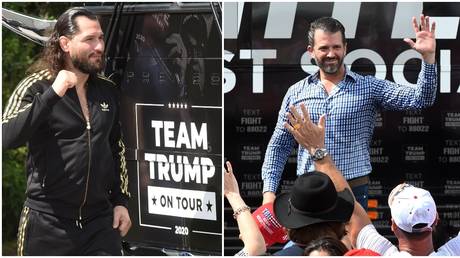