The model on-off lover of former Real Madrid and PSG star Jese Rodriguez has taken to the internet to give her side of a story that allegedly saw her run over the forward in her car.

Ex-Big Brother Spain star Aurah Ruiz has a two-year-old child with the 28-year-old flop, now at Las Palmas, and rekindled a fiery romance with him after a previous split saw them in court.

In the latest chapter of their chaotic relationship, it was claimed that eyewitnesses saw Aurah trying to run him over in her car after they attended a concert together, with footage spreading online of a figure being helped away on a path at the side of the road.

Rodriguez supposedly missed training due to the furor, returning on Wednesday as his team held a barbecue and midfielder Omenuke Mfulu told the media that his colleague was fine physically speaking.

And while Ruiz did admit to having rowed with the two-time Champions League winner, she refused to own up to the alleged attack.

In a video published by Mtmad and shared on social media, Aurah insisted: “I’ve not run anyone over. It’s a lie and very serious.”

“I’m not going to allow people to say I’ve run my partner over.”

“I know a lot of things have happened between us that we’re not proud of but we love each other and I never wanted to run him over.

“I know I lose my head sometimes but this?!!! How am I going to do something to the father of my child!! Are we all mad?!!” she asked.

Later, the influencer shared a photo of the pair via Instagram stories, with Rodriguez sleeping and the simple caption: “I love you.”

For the bad boy fired from PSG in December over a sex scandal, and accused of cheating on his influencer girlfriend, attention now turns to a derby at home against Tenerife tomorrow.

Firing up the troops for the big game between the sixth-placed hosts and their fourth-placed visitors, separated by just three points in the race up to La Liga from the Segunda Division, his team’s fans let off flares at their last training session ahead of the big showdown. 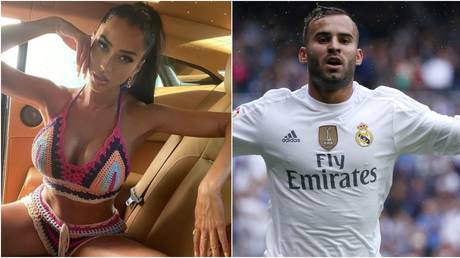