Russia’s Petr Yan says it is a “crazy time” for him as he prepares for his shot at the UFC bantamweight title this weekend against Brazilian legend Jose Aldo at the fabled Fight Island in Abu Dhabi.

Yan’s rise since making his UFC debut in June of 2018 has been spectacular, with ‘No Mercy’ rattling off six wins out of six in the octagon.

That rapid-fire run – which included a spectacular performance of the night KO against American veteran Urijah Faber last time out – has set up a shot at the 135lbs crown recently vacated by the retiring Henry Cejudo.

Yan’s chance comes against Brazilian former long-time featherweight ruler Aldo, 33, on a stacked card at UFC 251 this weekend, which opens proceedings on Dana White’s much-heralded project on Yas Island in the UAE capital.

Speaking to RT Sport on Fight Island, Yan, 27, said that he had made the trip from his training base in Thailand and that he was now settling into life at the complex ahead of business.

“The weather’s different [from Thailand], yes. Ideally I would have come earlier, but that wasn’t possible so it’s best not to not think about it and just focus on the fight,” Yan said.

The Siberian fighter said he never imagined he would propel himself to a title shot in such short time, but said when his chance comes he will be with the majority of the team who have been there from the beginning.

“Everyone except John was with me for my debut, now we’re fighting for the belt. Everyone who was with me from the beginning is here now… Team No Mercy.

On the topic of ‘crazy times’, Yan’s fight with Aldo will be held in the morning at local time, taking into account the heat and viewing times for the US.

Yan said that wouldn’t make a difference for him against Aldo – a man he knows from training with in the past.

“I’ll be fighting at around 9 or 10 am Abu Dhabi time. We’re already going to bed earlier, getting up earlier and training earlier,” Yan said.

He added that he’s had reason to fight during the early hours before, although not necessarily in the cage.

One man who had tipped Yan for success was renowned Russian MMA trainer Abdulmanap Nurmagomedov, who sadly died of Covid-19 complications at the age of 57 last week.

Yan described the death of the father and trainer of UFC lightweight champion Khabib Nurmagomedov as “tragic.”

“It’s a tragic situation first of all for the Nurmagomedov family, then for MMA, Russia and the world,” Yan said.

“I never met him personally, but he always said good things about me like, ‘this guy deserves to fight’ and ‘he can become a champion’. It was good to hear. He coached lots of exceptional athletes and champions in sambo, combat sambo. I think he’ll always be remembered by MMA fans and experts.”

Yan will be hoping to fulfill those words and his own long-held goal this weekend when he takes to the octagon with Aldo.

Watch RT Sport’s full interview with Petr Yan in the video at the top of the page. 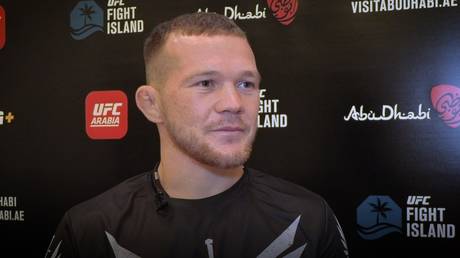 'Rich people get robbed every...