Close
Trending News
HomeSport‘It’s a 50/50 fight’: Edson Barboza, former opponent of both Khabib and Gaethje, can’t pick a winner ahead of UFC 254 (VIDEO)

With fight fans divided over who will come out on top in the highly-anticipated UFC 254 main event between Khabib Nurmagomedov and Justin Gaethje, one man who has faced them both says the fight is too close to call.

Brazilian Muay Thai expert Edson Barboza has his own business to take care of this weekend when he takes on Makwan Amirkhani on “UFC Fight Island” but the Finnish ace, who is an occasional training partner of Conor McGregor’s on the mats at SBG Ireland in Dublin, also has a rather unique perspective of the year’s most anticipated fight.

In late 2017, Barboza was in the midst of a three-fight win streak in the UFC’s lightweight division, generated in large part by his arsenal of vicious kicks and flying knee attacks. His run came to a shuddering halt when he stepped into the cage with Nurmagomedov, who was then still a contender chasing his own opportunity at UFC gold.

Three rounds and fifteen minutes later (and with one 30-24 score from a cageside judge) Barboza’s own title ambitions were in tatters and Nurmagomedov’s considerably enhanced.

A little over two years later Barboza met the other half of the UFC 254 main event, Justin Gaethje, in a UFC main event – and didn’t make it out of the first round, losing by knockout midway through the opening frame.

It could be argued, then, that Barboza has seen the best of both men: Khabib’s suffocating, dominant top control and Gaethje’s concussive KO power.

But which of these two styles does he think will topple the other on October 24?

“It’s going to be a great fight,” Barboza told the media, including RT Sport, in Abu Dhabi.

“Talk about both guys, best guys in the world. It’s a 50/50 fight. I don’t see somebody being better than the other one.

“Of course, Khabib has more grappling and Justin Gaethje hits super hard and has great wrestling too. It’s a 50/50 fight.

So, while Barboza remains firmly on the fence ahead of the Khabib-Gaethje showdown, the Brazilian is perhaps the most ideal link with which to judge the separate merits of the two fighters.

For Khabib to win, one expects the most likely route to victory is the one that he has employed throughout his undefeated career so far: take them down and dominate them on the floor – just as he did to Barboza.

Gaethje, meanwhile, will be hoping that his incredibly powerful striking and eye-watering leg kicks will be enough to do the job and while fans, the media and oddsmakers spout forth all manner of different opinions, perhaps Barboza’s is the most pertinent: it’s anyone’s fight. 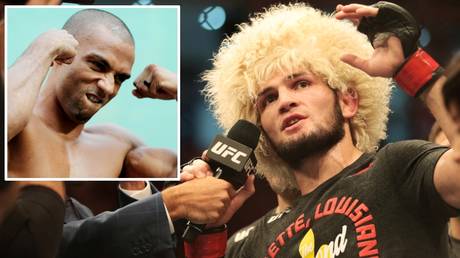