Close
Trending News
HomeSport‘It would be SO awesome’: Boxing legend Mike Tyson wants to fight champions ‘all over the world’

‘It would be SO awesome’: Boxing legend Mike Tyson wants to fight champions ‘all over the world’

‘It would be SO awesome’: Boxing legend Mike Tyson wants to fight champions ‘all over the world’

Returning former heavyweight boxing champion Mike Tyson has revealed that he wants to line up “the best fighter” in each country on a world tour, describing WBC king Tyson Fury as “very good” while slating Anthony Joshua’s skills.

Two-and-a-half weeks out from his exhibition against Roy Jones Jr, Tyson has admitted that he only wanted his comeback to last four rounds and suggested that he is looking beyond his fellow veteran towards possible scraps as part of a globe-trotting tour.

“I might do this for a while. I wanted to fight a four-round exhibition. Next thing I know, I’m fighting Roy Jones, it’s eight rounds and I’ve got three judges and I got a belt involved.”

Organizers the California State Athletic Commission have emphasized that the two fierce competitors will not be allowed to hurt each other in the ring in California, but the introduction of a title for the winner has made Tyson even more animated in his pre-fight hype.

“Now you tell me, is this an exhibition?” he continued. “You tell me.

“What the f*ck is going on? I want an exhibition, now I got a belt involved.”

Despite concerns over Tyson’s stated willingness to step into the ring with current champions – all of whom are considerably younger than he was when he lost his last two fights before appearing to retire in 2005 – the “Baddest Man on the Planet” has clearly been weighing up the division.

Describing WBC king Tyson Fury as “very good”, he said: “He looks like he’s not intimidating but he’s really elusive, he really knows how to box.

Fury is expected to fight WBA, IBF, WBO, and IBO holder Anthony Joshua in an all-British fight next year, and Tyson is less convinced by the Londoner.

“It’s very difficult being that big and having to fight a smaller guy.

“That guy could learn some more. He could be taught some more stuff.”

Tyson’s advice to Fury’s last victim, Deontay Wilder, illustrated his urge to make the most of time.

“When Wilder gets his head out of his butt, he’s good,” he observed. Wilder just gotta stop internalizing stuff – this guy is great.

“Just keep on fighting. Fight [Fury] a third time. Whenever you have an opportunity to fight for the title, he should fight.

“We can only do this for a certain amount of time in our life and then we can’t do it anymore. So we have to do it as much as we can before we end this stuff.” 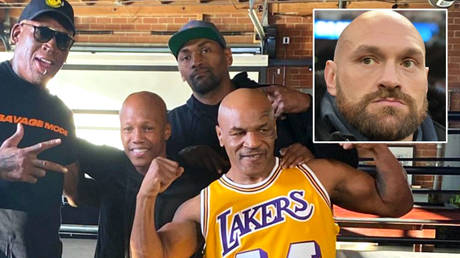