‘It would be awesome’: Washington head coach Ron Rivera wants Redskins’ name change BEFORE the start of the 2020 NFL season

‘It would be awesome’: Washington head coach Ron Rivera wants Redskins’ name change BEFORE the start of the 2020 NFL season

Washington Redskins head coach Ron Rivera said work is underway to rename the NFL franchise, and revealed his hopes for the club to unveil its new name before the NFL season’s mid-September start.

It was announced on Friday that the team was conducting a “thorough review” of the team’s name, and a host of outlets have suggested that a name change could be implemented before Week 1 of the 2020 NFL season, when Washington will take on the Philadelphia Eagles on September 13.

Coach Rivera shares that optimism, and told the Washington Post that he would love for things to be finalized and made public in time for the start of the season.

“If we get it done in time for the season, it would be awesome,” Rivera said.

Washington’s franchise owner, Dan Snyder, had previously said in 2013 that he would “never” change the team’s name, has since softened his stance following increased movements across America to eradicate racially-questionable references in public culture.

Snyder reportedly approached the NFL about the potential for changing the team’s name in mid-June after early internal discussions about the possibility.

Rivera revealed the he and Snyder have brainstormed a number of alternative names for the team, with two undisclosed names in particular heading the head coach’s list. He suggested the pair would both like the team’s new name to form a tribute to the nation’s military.

Corporate pressure toward changing the team’s name increased over the course of the last week, when the team’s stadium sponsors FedEx, plus PepsiCo and Nike going public with their wish for the Washington franchise to change their name.

Nike’s website removed all Redskins merchandise earlier this week, with Washington now the only one of the NFL’s 32 teams not to be listed on their site.

The team was first named the Redskins back in 1933 before the franchise was moved from Boston to Washington four years later. It had previously been known as the Braves.

The team’s former owner – and the man who birthed the Redskins name – George Preston Marshall, was commemorated by a statue outside the team’s old home at RFK Stadium. Under his stewardship, the Redskins were the last team to include black players in its teams, with its first black players signed in 1962. The statue has since been removed.

No official word has been made on the potential options for the Redskins’ new name, but one option could be the Washington Warriors, with Snyder already owning the franchise rights and trademarks to the name when he considered running an Arena Football League team back in 2009. 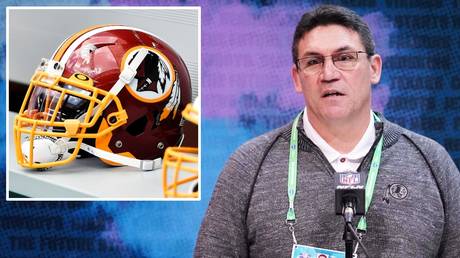