Will Kelly won’t forget his debut match with Collingwood in a hurry after the young prospect suffered a grotesque arm injury minutes into his first match with the team – before swiftly jogging off the pitch to receive treatment.

Kelly, the son of AFL legend Craig Kelly, was making his much-anticipated bow for Collingwood against Hawthorn after being drafted by the side in 2018 after injuries had derailed his first appearance for the team – but it looks as though the injury bug has bitten once again.

The youngster enjoyed a good start to the game, scoring a goal with his first kick in the league, but the smiles soon turned to another emotion entirely after he landed awkwardly after competing for a high ball, appearing to badly injure his left arm in the process.

Will Kelly’s first kick in footy… A GOAL 🙌#AFLPiesHawks pic.twitter.com/qrtxrciO6R

Nathan Buckley says Will Kelly has a dislocated elbow (but hasn’t ruled out a fracture) 😢#AFLPiesHawks pic.twitter.com/xXIrZ6ovMx

Incredibly, it happened on almost exactly the same part of the pitch in which Jayden Short suffered an identical injury while playing for Richmond last year.

“It’s a tough game,” Collingwood coach Nathan Buckley told the media shortly after the game. “Obviously it is bittersweet. He looked like he was enjoying himself and he was part of a solid team performance. I think the early diagnosis is a dislocated elbow [but] we don’t know if we can rule out a fracture at this point.”

Predictably, social media has reacted to the injury with horror with several tweets wishing the player well ahead of what may well be a lengthy recovery.

Will Kelly’s arm looked like it went 15 different directions, but the young fella was still there to sing the song after a solid win. Positive signs that it isn’t too bad. #AFLPiesHawks

Will Kelly smiling and arm just in a sling. Maybe just a dislocation? Please?

“At times it’s two steps forward, one step back. It’s cruel, but it’s the way it is.

“He barely played a game last year, so he’s been through a lot of hardship with injury. To see him come out and slot the first goal of the game was awesome. It was a taste of the highs of AFL – and then you come crashing back to earth.

“We’ll get around him. It’s disappointing for sure.” 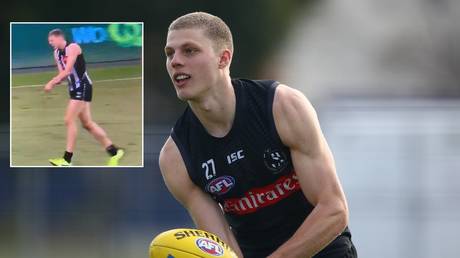 Is Spotify down? How to check if t...