‘It was CRAZY’: Tyson Fury claims Mike Tyson was asking for $500 MILLION for exhibition fight

‘It was CRAZY’: Tyson Fury claims Mike Tyson was asking for $500 MILLION for exhibition fight

Tyson Fury has revealed that his namesake Mike Tyson was seeking an astronomical fee in the region of $500 million for an exhibition fight with as part of the boxing legend’s mooted ‘comeback’ to the ring.

Fury, 31, told UK media that he had been contacted by ‘Iron Mike’ in a bid to agree terms on what was planned to be a money-spinning showdown between the retired boxer and today’s consensus best heavyweight on the planet, but as soon as they began talking money Fury says things became complicated.

“There was talk of it,” Fury said to iFL TV of a potential Tyson vs. Tyson showdown.

“His people contacted me, me and Mike had a phone call, it was all real but never materialized. Whoever was offering the comeback money to Mike offered us peanuts.

“Mike was talking about $500 million figures but what came back to us on paper was a joke, it was crazy. I did have a $10m offer from ESPN to do the fight as an exhibition but I think everyone has moved on now.”

The purse being suggested by Mike Tyson’s camp, if guaranteed, would have been by far the largest purse in boxing history and dwarf the rumored $275 million reportedly earned by Floyd Mayweather in his 2017 fight with Conor McGregor.

Ultimately, though, Fury doesn’t think that he has much to gain from sharing a ring with the Tyson.

“I would have just loved to share the ring with him and move around. But if he had won then people would have said I was rubbish because a 53-year-old beat me and if I had beaten him then I would have been a bully.

“It was a lose-lose situation for me. It was money I didn’t need to fight a man past his best.”

Tyson Fury saying Daniel Kinahan for “PM” on his Instagram on the day they supposedly part ways pic.twitter.com/CLJSmfhd67

Meanwhile, Fury has commented for the first time after dropping alleged crime boss Daniel Kinahan as his advisor after the Irishman was linked in reports in his native Ireland, the United Kingdom and the United States as being heavily involved in an international drug cartel.

Writing in an Instagram Story, Fury posted a picture of Kinahan and appeared to compare him to Donald Trump before suggesting that he should run for ‘PM’, or Prime Minister.

This will fuel rumors that the Fury-Kinahan partnership remains intact despite Wednesday’s announcement that Kinahan had been removed from Fury’s negotiation team. 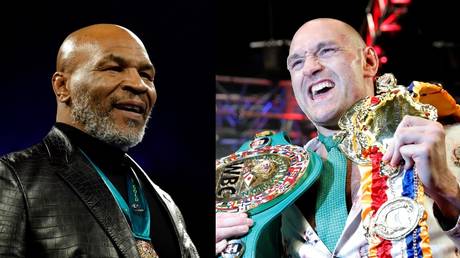