‘It was after Scherzinger’: Russian model Viktoria Odintcova says she was pursued by F1 ace Hamilton

‘It was after Scherzinger’: Russian model Viktoria Odintcova says she was pursued by F1 ace Hamilton

Russian Instagram stunner Viktoria Odintcova has claimed Formula One world champion Lewis Hamilton pursued her romantically several years ago but says their relationship has since transformed into friendship.

In an interview with Peopletalk TV, the Instagram model said that Hamilton showed affection intentions towards her after breaking up with pop star and long-time partner Nicole Scherzinger.

“We had different types of relationship,” Odintcova said. “At a certain period of time it was romantic. He was courting me. But then this relationship evolved into friendship. I live in Russia and he lives abroad, we just became friends who can message each other and send holiday greetings.”

“It was after Nicole Scherzinger. We met in Barcelona three or four years ago. We have been on good terms since then, he’s my friend. We don’t have any romantic (relations). We can call each other asking, ‘How are you doing? Let’s drink coffee someday’. That’s it.”

Odintcova, who has attended Formula One races at the personal invitation of Hamilton, said she has been bombarded by messages from football players which she prefers to ignore.

“I often receive messages from professional athletes, especially from European footballers. I don’t even remember these names. I just see, ‘Oh one more message from some player’. I don’t even open them.”

Last year the model made headlines across the world after revealing that Portuguese football icon Cristiano Ronaldo had once slid into her Instagram DMs. 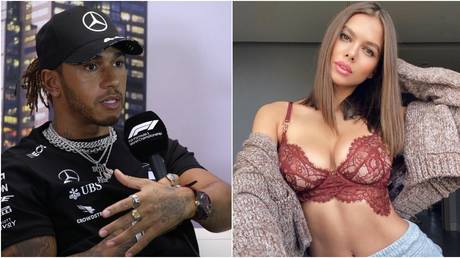 Pubs and restaurants stay SHUT but...