‘It looks like Chernobyl… minus the charm’: BILLION-DOLLAR new Texas Rangers stadium lampooned by fans (VIDEO)

‘It looks like Chernobyl… minus the charm’: BILLION-DOLLAR new Texas Rangers stadium lampooned by fans (VIDEO)

A new billion-dollar facility opened by MLB’s Texas Rangers has been slammed by fans who say it resembles the sarcophagus designed to limit the spread of radioactivity from the ill-fated Chernobyl power plant.

The $1.1 billion Globe Life Stadium is hailed by the team as being a state of the art facility capable of housing 50,000 fans and boasts a number of features such as air-conditioning but if the inside of the arena has been hailed as among the most advanced in the league, the outside of it hasn’t quite been met with the same enthusiasm.

A video released online to showcase the stadium’s features was blasted by Twitter, with some of them saying it looks like the colossal safety barrier constructed on the site of the Chernobyl disaster.

Minus the charm, of course. https://t.co/xfXvnCsBhv

The promotional video released by the Rangers’ media team was picked apart immediately, with it being described as everything from a “silo in the middle of Iowa“, to an “upside down Turkey roasting pan.“

Others admitted that the inside of the facility is indeed impressive, even if it doesn’t quite look like the images released prior to the completion of the stadium.

The chances of the new arena being filled to capacity anytime soon remains unrealistic, for now at least. The MLB has pushed forward with the idea of holding a condensed season to begin on July 23 or 24, with each game being held in empty stadiums mirroring the reintroduction of live sports in Europe.

However, the league is still dealing with the impact of Covid-19 on its athletes – with several members of the Philadelphia Phillies roster recently testing positive for the potentially fatal illness. 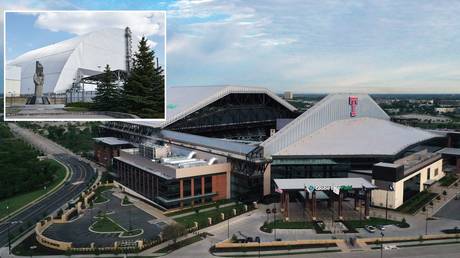