‘It doesn’t get more illegal than this’: MMA fighter gets KO’d by BRUTAL knee strike in LFA bout (VIDEO)

‘It doesn’t get more illegal than this’: MMA fighter gets KO’d by BRUTAL knee strike in LFA bout (VIDEO)

UFC veteran Boston Salmon was on the receiving end of one of the more concussive illegal strikes in recent memory, as he was drilled with a knee by Shawn West at a Legacy Fighting Alliance event on Friday.

Salmon, who went 0-2 in a recent run in the UFC, was awarded the victory while still prone on the canvas after being hit with the vicious knee strike during his LFA 84 fight with West in South Dakota.

The illegal shot left Salmon dazed and bloodied on the canvas but after being deemed unable to continue the bout, he emerged the victor after officials disqualified West for his clearly illegal technique.

The incident came after West landed a thunderous right hand to his opponent, sending Salmon sprawling backwards. A finish appeared close but the overly-exuberant fighter rushed forward with a knee – which connected squarely to Salmon’s head while he was still a downed opponent.

The unified rules of mixed martial arts dictates that a fighter is considered ‘grounded’ if either of his knees or hands are touching the canvas, with knee strikes or kicks to the head outlawed from this position.

It doesn’t get more illegal and vicious than this. Man. pic.twitter.com/400ocJu6iD

Several figures within the mixed martial arts community, such as ESPN’s Ariel Helwani above, reacted to the clip with horror, referring to it as one of the more obvious illegal strikes the sport has seen in recent times.

This is hard to watch. What a rough athletic endeavour MMA is. My god. Hope he is ok. https://t.co/geTPURxM4k

Holy shit.
That was really bad…
Doesn’t get much more illegal than that. I feel awful for Boston Salmon.

As of Saturday afternoon, there has been no update as to Salmon’s condition following the fight. 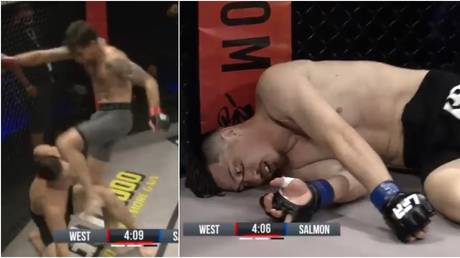 ‘They should be banned from th...

‘They should be banned from the Premier League’: Fans pile in as Chelsea annihilate hapless Norwich to stay top of table