‘It didn’t resonate with my mission’: LeBron James reveals he WON’T wear social justice messages on his jersey when NBA returns

‘It didn’t resonate with my mission’: LeBron James reveals he WON’T wear social justice messages on his jersey when NBA returns

Los Angeles Lakers superstar LeBron James has revealed that he will not be sporting a social justice message on the back of his jersey when the Lakers’ NBA season resumes on July 30.

As part of the league’s movement to recognize players’ wishes to state support for causes such as Black Lives Matter, the NBA has permitted players to carry social justice slogans on the backs of their jerseys instead of their surnames when the league resumes later in July.

But Lakers star James said he won’t be participating in the initiative, after telling reporters on a conference call on Saturday night, “I don’t need to have something on the back of my jersey for people to understand my mission or know what I’m about and what I’m here to do.”

James revealed that he had viewed the list of league-approved phrases and didn’t feel any of them were suitable to replace his name on the back of his Lakers jersey when they face the Los Angeles Clippers on July 30 in Orlando.

“It was no disrespect to the list that was handed out to all the players,” James said.

“I commend anyone that decides to put something on the back of their jersey. It’s just something that didn’t really seriously resonate with my mission, with my goal.

“I would have loved to have a say-so on what would have went on the back of my jersey. I had a couple things in mind, but I wasn’t part of that process, which is OK. I’m absolutely OK with that.”

Some of the social justice phrases reportedly included on the approved list include, “Black Lives Matter,” “Say Their Names,” “I Can’t Breathe,” and
“Respect Us.”

James’ Lakers teammate JaVale McGee selected the latter phrase, and explained why his jersey will declare “Respect Us” when he returns to the court.

“I definitely feel like respect is a key factor in social injustices,” McGee said.

The Lakers gathered together Saturday for their first group practice session ahead of the resumption of the NBA season.

“It gave me an opportunity to be home and make up a lot of time that I’ve lost over the years because I’ve been playing in this league and striving to be one of the greatest, if not the greatest, to ever play this game,” said James.

“So sacrificing my family at times was the most challenging and hardest part of it all.” 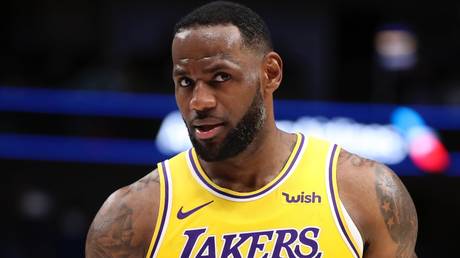