‘It ain’t easy getting people into the country’: Dana White cites travel issues for Khamzat Chimaev’s absence from UFC 252

‘It ain’t easy getting people into the country’: Dana White cites travel issues for Khamzat Chimaev’s absence from UFC 252

A matter of weeks ago most fight fans hadn’t heard the name Khamzat Chimaev but now questions are being asked of UFC president Dana White as to why the Chechen-born Swede isn’t fighting for the THIRD time in a month at UFC 252.

After two utterly dominant performances on ‘Fight Island’ in the span of just 10 days, it wasn’t a question of “if” but “when” Chimaev would make his next octagon appearance.

Of course, if you were to ask him he would have said he was good to go the very next day. But commissions, medics and pen-pushers, and a lack of an opponent, meant that “Borz” would have to wait some time to make his next appearance.

He was reportedly aiming to compete on Saturday’s night’s UFC 252 card in Las Vegas – something UFC president Dana White indicated he was interested in pursuing – but the White explained to the media in Las Vegas this week that Chimaev’s absence from the card wasn’t for a lack of trying.

“He wants to fight and people will fight him,” White explained.

Although Chimaev is still just 8-0 in his young professional career, the manner of his two wins in July drew comparisons with the dominant style of grappling employed by the likes of Khabib Nurmagomedov, even down to some of the descriptive language he uses.

“I like to fight, taking the cage and smash somebody,” he said after his win against Rhys McKee, via MMA Fighting.

“It’s too easy, too easy to smash somebody and get money, brother. It’s perfect for me. I have eight fights and eight finishes. I destroy everybody.”

With the UFC likely to go back to Abu Dhabi’s “Fight Island” in the near future, it remains highly likely that Chimaev will be handed another opportunity to impress. And if Dana White gets his way, we could well be seeing him doing the same in Las Vegas very soon. 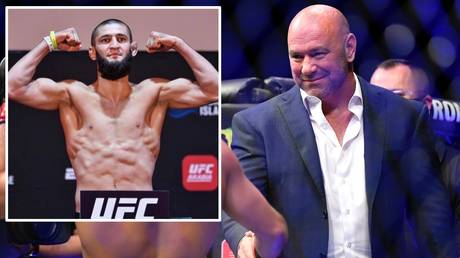