Islam Makhachev, the man anointed by many as the successor to Khabib Nurmagomedov in the UFC lightweight division, will be given his next opportunity to climb the ranks when he faces gritty Brazilian Thiago Moises in July.

Nurmagomedov’s recent retirement has left a vacuum atop the UFC’s 155-pound fold which will be filled when Michael Chandler and Charles Oliveira meet this weekend to determine the latest titleholder in one of the UFC’s most talent-filled weight classes.

Among the chasing pack, which also includes the like of Conor McGregor, Dustin Poirier and Justin Gaethje, stands a man who has been prophesied as the next Russian grappler to dominate the division, and Makhachev has been handed another opportunity to prove his credentials when he takes on the experienced Brazilian fighter Moises on July 17, according to an initial report by ESPN.

Makhachev, who is 19-1 in his mixed martial arts career to date, has won seven straight fights at 155lbs, including a March submission win against American fighter Drew Dober in what was the Dagestan native’s first fight for the organization in 18 months.

The 29-year-old has also picked up notable wins against Gleison Tibau and Nik Lentz during his run of victories.

In Moises, though, he faces a tricky test of his standing among the UFC’s lightweight elite. The 26-year-old is a former champion of the Resurrection Fighting Alliance and has pieced together a trio of impressive wins against Alexander Hernandez, Bobby Green and Michael Johnson in his most recent outings.

Moises has been defeated just twice in his UFC career to date, losing to Beneil Dariush – who faces Tony Ferguson in a top contender bout this weekend – and Russian fighter Damir Ismagulov.

Specifics on the July 17 card, including the location and the main event, are yet to be revealed, but it is expected to feature the return of former UFC women’s bantamweight champion Miesha Tate, who will take on the experienced Marion Reneau. 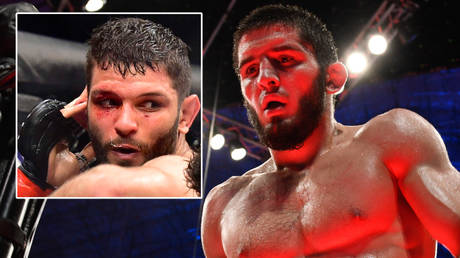