After bitter rivals Manchester United had suffered the ignominy of a 6-1 drubbing at the hands of Jose Mourinho’s Tottenham Hotspur at Old Trafford, Liverpool fared even worse in their match at Villa Park.

7 – Liverpool are the first reigning English top-flight champions to ship seven goals in a league match since Arsenal against Sunderland in September 1953. Embarrassed. #AVLLIV pic.twitter.com/CAnLAPG7b5

As astonishing rout began when Liverpool goalkeeper Adrian – who was replacing the injured Alisson Becker – misplaced a pass across the penalty box to allow Jack Grealish to set up Ollie Watkins to open the scoring for the hosts inside the first five minutes.

Watkins then added a stunning second on 22 minutes before Liverpool hitman Mo Salah pulled a goal back for the champions 11 minutes later.

But Villa restored their two-goal cushion when John McGinn’s effort deflected off Virgil van Dijk and looped over Adrian and into the net.

Watkins made it four – and bagged a hat-trick for himself – six minutes before half-time when he headed home as Liverpool were in complete disarray at the back.

Incredibly, new boy Ross Barkley – on loan from Chelsea – made it 5-1 with a deflected shot on 55 minutes, and while Salah again gave Liverpool hope of an unlikely comeback by making it 5-2 with half an hour to play, Villa added two more to their tally through a double from inspirational skipper Jack Grealish.

The figures made record reading for Liverpool for all the wrong reasons.

7 – Liverpool have conceded seven goals in a game for the first time since April 1963, in a 7-2 defeat to Tottenham Hotspur. Crushing. #AVLLIV pic.twitter.com/CrvMuNFuYk

Fans noted the craziness of a day of Premier League football in which Liverpool and Manchester United – England’s most decorated clubs – had conceded 13 goals between them.

Fairplay to Liverpool for helping Man Utd fans suffering from depression. Somethings are bigger than football.

6 – For the first time in the two clubs’ history, both Liverpool and Manchester United have conceded six goals in a match on the same day. Unbelievable. pic.twitter.com/42vsBHULeH

Others such as TV personality Piers Morgan noted the flying start made by Merseyside rivals Everton to the season, with their perfect record of four wins from four.

Liverpool appear to have suddenly gone from the best team in the world to the worst team on Merseyside.

Jamie Carragher: “Liverpool have been destroyed. It’s a kids game.”

Others simply wondered whether this was, in fact, real life. 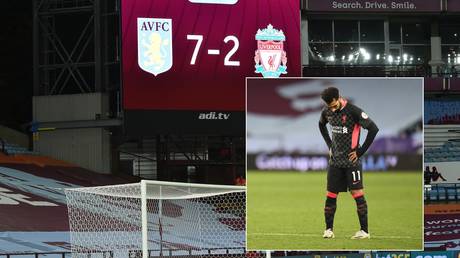