Close
Trending News
HomeSportIs this his year? Tipped by Federer, Russian star Rublev is living up to the hype as he books back-to-back Slam quarterfinals

Is this his year? Tipped by Federer, Russian star Rublev is living up to the hype as he books back-to-back Slam quarterfinals

Is this his year? Tipped by Federer, Russian star Rublev is living up to the hype as he books back-to-back Slam quarterfinals

Rising tennis star Andrey Rublev was tipped for big things in 2020 by Roger Federer himself, and the Russian is living up to the hype after securing back-to-back Grand Slam quarterfinal places with another win at the French Open.

Rublev has previous in Paris, having won the French Open junior title in 2014 at the age of 16.

He was also named the ITF Boys’ Junior World Champion that year, a title that has been won in the past by the likes of Federer, Ivan Lendl and Stefan Edberg.

The Russian made a surprise run to the US Open quarterfinal three years later, becoming the youngest male player to reach that stage since Andy Roddick in 2001.

He beat seventh seed Grigor Dimitrov and ninth seed David Goffin along the way, only succumbing when he met Rafael Nadal in the last eight.

It has been a difficult road for him since, however, after he missed three months of action in 2018 due to a stress fracture in his lower back.

His return was hampered by a six-week layoff with a wrist injury last year as his singles ranking tumbled to 115, but he left an impression on Federer when he dismantled him 6-3, 6-4 in just 62 minutes in Cincinnati in the summer of 2019 – the Swiss maestro’s fastest defeat since 2003.

Asked to tip a youngster to have a big year in 2020, the 20-time Grand Slam winner was quick to single out Rublev.

“I think that Rublev is going to be something special,” he said. “He played great against me in Cincinnati, he impressed me a lot there.”

So it has proved.

Rublev opened 2020 with back-to-back ATP titles at the Qatar Open and the Adelaide International, before his best performance at the Australian Open saw him reach the fourth round.

Rublev went one step further in New York last month, reaching the quarterfinal for a second time before losing to compatriot Daniil Medvedev.

He added a third title for the year at the Hamburg European Open on September 27, when he beat Stefanos Tsitsipas in three sets, and from 115th in the world he’s now ranked 12th and knocking on the door of the top 10.

His form has continued in Paris, with four wins from four taking his match record to 29-6 this year.

Rublev almost exited Roland Garros in the opening round, but he impressively battled back from two sets down to beat Sam Querrey in five.

His resilience was on show once again in his contest with Fucsovics, who claimed the first set on Monday and led 5-2 and 3-1 in the second and third sets. Rublev also saved three set points at 0-40 in the fourth set, before winning 11 of the final 14 points of the set to win it and the match on a tiebreaker after almost four hours.

The youngster showed impressive humility following the match, after which he said: “I think I was a little bit lucky.”

“I expected a match exactly like this,” Rublev added. “I expected it to be really, really tough. I’ve played him two times before. In Davis Cup I lost to him in five sets [on clay], so I knew it was going to be really tough. But in the end I’m really happy I won today.”

He’ll face Tsitsipas in the quarterfinal, less than two weeks after he triumphed over him in the final in Hamburg.

He boasts a 2-1 head-to-head record against the Greek and experience of beating him at a Grand Slam, having defeated him in the first round of last year’s US Open in four sets. More recently, the Russian prevailed in three sets in their Hamburg Open final on the eve of Roland-Garros.

Like Rublev, Tsitsipas lost the opening two sets of his French Open campaign against Jaume Munar, but he has bounced back in impressive fashion, not dropping a set since.

Aside from a run to the Australian Open semifinal last year, Tsitsipas has little advantage over Rublev when it comes to competing at this stage of a Grand Slam, though.

Rublev is 10-1 when competing on clay this season and has shown in the past he can cause Tsitsipas problems with his powerful serve and monster forehand, so a semifinal berth is hardly beyond the realms of possibility.

And beyond that, perhaps even an outside chance of a Grand Slam final and making good on Federer’s predictions for huge things in 2020. 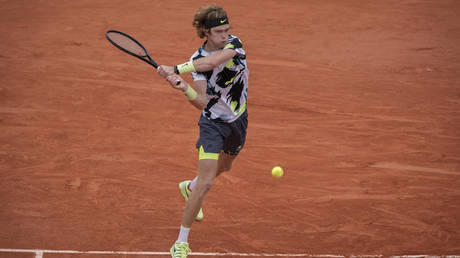