Close
Trending News
HomeSportIs the NFL creating a problem for itself in its drive to vaccinate players?

Is the NFL creating a problem for itself in its drive to vaccinate players?

Is the NFL creating a problem for itself in its drive to vaccinate players?

The NFL’s pressure campaign to convince players to get a Covid-19 jab has led to an almost 94% vaccination rate amongst its players but several further pitfalls – some of which seem self-inflicted – could still impact the season.

America’s largest sports organization has come as close as any when it comes in persuading players from the league’s 32 teams to inoculate themselves against a virus which, some 18 months into the pandemic, continues to ravage sections of United States society – and from their point of view, you can see why.

Last season’s NFL campaign was severely hampered by the virus. Much like most other sports, clubs and the league itself were forced to grapple with the downturn in their economies which came as a result of playing before cavernous, empty stadiums. Not just that, despite teams’ best efforts and the introduction of strict ‘Covid bubbles’, infections were commonplace and led to a string of bizarre situations.

Think the Denver Broncos playing an entire game without the services of a quarterback after a breakout in the QB room, or the Cleveland Browns having to play their first playoff game in two decades with head coach (and 2020 Coach of the Year) Kevin Stefanski watching on asymptomatically from his basement on TV.

But now as the sport inches back towards solid ground it faces a festering chorus of discontent from a small but vocal minority of players who, for whatever reason, oppose receiving their shot – and despite the NFL proudly proclaiming that around 94% of its players are fully vaccinated, that remaining 6% leaves more than enough room for controversy.

Sport is, to some degree at least, a vector for larger public discourse and in the United States much of that discourse is enveloped by vaccine debate. Few scientists would dismiss the benefits of wide-scale inoculation but to many this stands in opposition to some of the country’s more Libertarian instincts against state intervention in most matters and especially when it comes to something like a vaccination drive.

The merits of both of these positions have been discussed at length and there is no need to do so again here, but what what is left when the smoke clears is the NFL’s reflection of a larger public malaise in the US.

Buffalo Bills duo Cole Beasley and Isaiah McKenzie had been two of the more vocal figures within the league who had stated their opposition to getting a shot. Beasley remains steadfastly tied to his position but McKenzie has been swayed, posting to social media his vaccination certificate just a day after another Instagram photograph showing his notification of a near $15,000 fine issued to him after he failed to wear a face mask inside his own training facility. He was one of 25 players to have been handed the same financial penalty.

And in a league spanning the entire country and all the myriad political opinions which come with that, it has left accusations of coercion. To be clear though, polling indicates that the majority of NFL fans are pro-vaccine and are generally supportive of players – and society as a whole – taking the jab, but when it comes to freedom of choice, coercion is an incompatible concept.

Clubs will say that incentivization and coercion are two different things, with relaxed protocols applying to vaccinated players and stricter ones, including daily tests, being for the unvaxxed minority of players – who as it stands will be prevented from socializing or dining with their teammates for the entirety of the season.

An unvaccinated player proved to have caused a breakout within his team which forces the postponement of cancellation of a game can be subject to a further array of harsh penalties, including his team forfeiting the fixture and players from BOTH TEAMS not being paid, which means you can add peer pressure to the range of tactics the NFL have employed.

And it is these blindspots that the NFLPA opposes. No player, they say, should be cut because of their vaccination status but with roster cutdown day on Tuesday where clubs will trim their rosters from 90 or so to 53 meaning that more than 1,100 players are about to lose their jobs, you can be sure that some coaches will be forced to choose between vaccinated and unvaccinated players.

The way the land lies at the moment, you can only see those types of decisions going one way.

Of course, what unites everyone on all sides of the debate is a desire for the league season to unfold entirely without complication and for Covid-19 infections among players and staff to be kept at a minimum, but with players, clubs and the league itself walking its own self-imposed tightrope in an attempt to keep a lid not just on the virus but on positions of freedom of choice and personal responsibility, you’d wonder if they’ve bitten off more than they can chew. 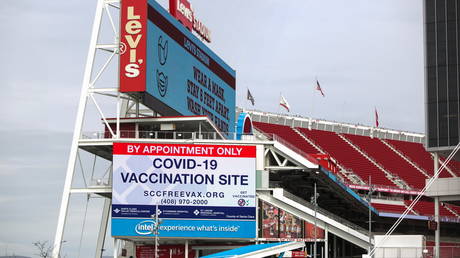 EU removes US from safe-travel lis...