‘Is that Borat on the commentary?’ MERCILESS fans mock Russian football commentator as he goes viral for all wrong reasons (VIDEO)

‘Is that Borat on the commentary?’ MERCILESS fans mock Russian football commentator as he goes viral for all wrong reasons (VIDEO)

An unfortunate Russian football commentator has gone viral for all the wrong reasons after merciless fans likened his description of the action in the Moscow derby between CSKA and Lokomotiv to listening to movie character Borat.

CSKA and city rivals Lokomotiv met in the Russian capital on Thursday night in a crunch battle to seal a Champions League spot.

Lokomotiv ran out 2-1 winners in a tightly contested game at the RZD Arena thanks to a penalty double from rising star Aleksei Miranchuk – the second of which came in second-half injury time – but it was the equalizer from CSKA attacking midfielder Vlasic which made headlines outside Russia thanks to the English-language commentary provided by the league for foreign broadcasts.

Replays of the well-taken strike from Vlasic were picked by fan accounts at former club Everton, where the Croatian star was praised for providing the kind of attacking threat that the Merseyside club could well regret letting go last summer.

But while the goal caught the eye, so did the English commentary from Leonid Tentsov on the Russian Premier League’s YouTube channel.

“F*ck the goal is that Borat on commentary?” mocked one fan, triggering a barrage of memes on the hapless Sacha Baron Cohen character.

Fuck the goal is that Borat on commentary ?😭😭😭 https://t.co/B4aovIToKg

In Tentsov’s defense, Borat does, of course, hail from Kazakhstan rather than Russia, and the commentator can at least call the action in a language other than his native tongue – something many of his detractors would no doubt be unable to do.

Some leapt to praise the unfortunate pundit, commending his usual commentary skills.

. @premierliga_en going viral for maybe not quite the reasons they expect!

Poor old Leo, he does a good job on commentary! https://t.co/CiWejUoarV

The Russian Premier League launched English-language commentary this season as part of its YouTube package for fans outside the country, as it seeks to boost the popularity of the league with foreign fans.

Thursday’s win for Lokomotiv ensured they will finish in the top three and book a spot in Champions League qualifying at the very least, as they moved five points ahead of Krasnodar in third, who have a game in hand.

CSKA are two points behind Krasnodar heading into their final game of the season on Wednesday.

Zenit St. Petersburg have already been crowned champions, defending the title they won last season and sitting 15 points clear at the top of the table. 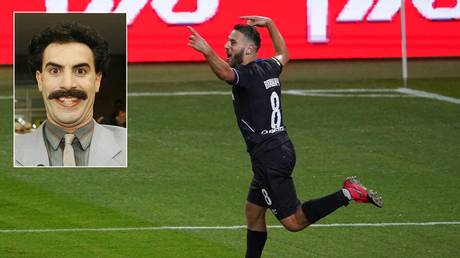 'When does your Only Fans com...