Manchester City’s official Twitter account has been suspended, with bewildered and bemused football fans climbing over themselves to make jokes about the club’s lack of history before being bought by billionaire owners in 2008.

City’s official account on the social media site went missing with over 8.5 million followers on Wednesday, but instead of mourn its demise, the world of football fandom, not famed for its sentimentality, piled on.

😬 When you see @ManCity have been suspended… pic.twitter.com/lEp3VWcUr6

Most fans were quick to made the quip that the account had been binned off because the club didn’t exist before 2008, as the legal age to use Twitter is thirteen years of age, and also insinuating a nod to the club only coming into prominence when bought by billionaire owner Sheikh Mansour in 2008.

ManCity got suspended because you’ve to be older than 13 to use Twitter. pic.twitter.com/5rV7T0CBF6

Others suggested the ban came as a result of moneybags City breaking the Twitter Financial Fair Play rules and buying followers, for which they were the subject of a UEFA ban, overturned by the Court of Arbitration for Sport, which led to more jokes that Twitter was more effective than European football’s authority for enacting bans against the club.

@ManCity got suspended for trying to buy followers.

You love to see it. pic.twitter.com/sDOLRAq2dH

As yet nobody knows the real reason the account was suspended, but like with most bans that Manchester City receive, they always have the option of simply buying their way out of trouble. 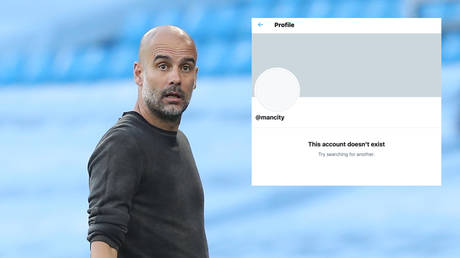