Fans have asked whether Liverpool will discipline Mo Salah after the reckless Egypt hero was caught on camera dancing without a mask at his brother’s wedding, causing them to brand his behaviour “irresponsible” and “disgusting”.

The Egyptian FA (EFA) revealed that Salah had tested positive on Friday afternoon, only to swiftly replace references to their star striker with an announcement that three players had undergone a retest.

Salah had been due to play for his country in their Cup of Nations Qualifier match at home to Togo on Saturday and in the return fixture on Tuesday, but his presence is now in serious doubt after news spread that he had caught Covid-19 and a video circulated of him dancing in a crowd at his brother’s wedding before joining Egypt’s training camp.

Fans of the Pharaohs and Liverpool, who have a crunch match at home to early Premier League pacesetters Leicester next Saturday, will breathe a sigh of relief should Salah’s result prove a false alarm, although there was little sympathy for the Champions League winner’s actions.

“If this is true, it shows a complete lack of dedication to your profession,” wrote one disgruntled watcher of the footage, which attracted hundreds of thousands of views after being posted by an Egyptian magazine.

“Both Egypt and Liverpool should be livid. It’s OK to go to the wedding but control your exposure to others at this time.”

Others argued that Salah had not broken the law and was observing local guidelines, countered by critics who insisted that Salah’s status as an elite sportsman gave him extra responsibilities to stay healthy and protect others during the pandemic.

Football authorities and national teams have been fiercely criticized for what many view as an unnecessary round of international fixtures this week, sending the likes of Salah thousands of miles around the world in arrangements that have already been blamed for causing new infections.

Croatia captain Domagoj Vida discovered he was about to receive a positive test result at half-time of his nation’s match in Turkey, and Ireland midfielder Alan Browne’s diagnosis was only revealed after he had played a full match against an England team full of Premier League stars at Wembley.

Salah endured a more personal immediate backlash because of his complete rejection of social distancing during the raucous scenes in Cairo, when he was portrayed dancing in the middle of a circle with a mask lowered to his chin.

He was seen dancing with a woman who appeared to be his brother’s bride at one point, and also attended a ceremony to recognize his achievements in the Egyptian capital during the week, attended by many veterans of the sport and former national team managers.

While pictures showed the audience at the award event wearing masks and observing social distancing, Salah chose not to don one as he walked to the stage to accept the Inspirer Award for his work as a role model to millions of young people around the world.

Disgusting. No other words…

If this is true it shows a complete lack of dedication to your profession, both Egypt and Liverpool should be livid. It’s ok to go to the wedding but control your exposure to others at this time .

I can’t help wondering if the club were informed about this (or gave their permission for him to attend). Incredibly irresponsible all around, if so. If not, well that’s another question entirely, and not really the blame of international football, as much as I despise it.

“Surely he will be disciplined by the club for this?” asked one observer, writing just days after Liverpool boss Jurgen Klopp had vehemently questioned the level of concern for player welfare shown by international associations.

Klopp had been frustrated by injuries to some of his players and now faces as anxious a wait as Salah does to discover whether his positive test result will be confirmed.

Several members of Klopp’s squad have already missed Premier League matches because of Covid-19, with Thiago Alcantara, Sadio Mane and Xherdan Shaqiri all returning positive tests and Naby Keita reportedly being diagnosed while he was on international duty with Guinea last month.

“He’s at his brother’s wedding,” an apologist for Salah said, voicing an opinion that would be unlikely to win Klopp or Egypt manager Hossam El Badry over.

All that contact and he’s hasn’t dived to the floor and screamed for a pen. We sure it’s Salah?

Surely he will be disciplined by the club for this?

“You can’t stop players from going to their own family’s weddings.”

Another joked: “All that contact and he hasn’t dived to the floor and screamed for a penalty. Are we sure it’s Salah?”

The revised statement by the EFA said: “The laboratories of the Ministry of Health have indicated that three players from the Egyptian and Togo teams have tested positive before the match between the two teams tomorrow.

“Other tests will be conducted for the aforementioned players to determine their position on participation.” 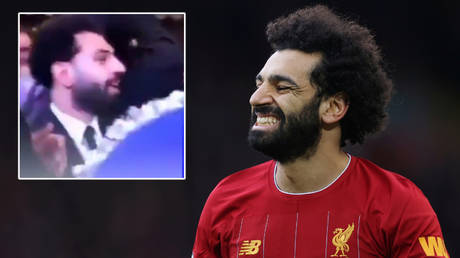