The Iranian was sanctioned by the Asian Football Confederation after performing the celebration – in which he stretches the outside of his eyelids – in Wednesday’s Champions League quarterfinal, having scored both goals in a 2-0 win over Uzbekistani side Pakhtakor.

Persepolis’ Isa Alkasir is banned for six months from taking part in any kind of football-related activity or violating Article 58.1.#ACL2020https://t.co/srb78pI64i

The AFC added that the suspension would begin with immediate effect, which ensured Alekasir missed the semifinal, and he was also hit with a $10,000 fine.

According to Article 58.1, “anyone who offends the dignity of a person or group of persons through contemptuous, discriminatory or denigratory words or actions concerning race, skin color, gender, disability, language, age, physical appearance, religion, political opinion, wealth, birth or any other status, sexual orientation, or ethnic, national, or social origin has committed an offence.”

Although the celebration has been perceived to be a racist gesture, the 30-year-old has performed it throughout his career in Iranian domestic football and said he does it in honor of his nephew.

His explanation has evidently satisfied those in the Persian Gulf Pro League, as it’s said he has been “repeatedly cleared of any wrongdoing” regarding the tribute in the past.

In the wake of the ban, fans rushed to defend the player.

Shane on you @theafchub , he had done it for his nephew since 2016! pic.twitter.com/pVlnN1w6bn

This is his special joy. This has been the case for a long time pic.twitter.com/fzJ5qNQayW

Alekasir has been a vital player for Persepolis in this year’s Champions League campaign. As well as netting a brace in the quarterfinal, he also scored in their final group game and notched the decisive goal in their 1-0 round-of-16 win over Al Sadd.

Despite his absence on Saturday, Persepolis booked a place in the final with a 5-3 penalty win over Al Nassr, after the two sides played out a 1-1 draw over 120 minutes.

They’ll face the winner of the Eastern half of the draw on December 19. 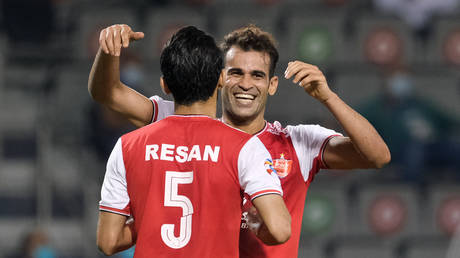