Olympic bronze medalist Daria Bilodid has given her social media following of almost half a million a pep talk inspired by her outstanding career, speaking out in between posing for fashion mag Vogue and judging a beauty contest.

Two-time world champion Bilodid made history at the Tokyo 2020 Games, beating Israeli judoka Shira Rishony to claim bronze and earn Ukraine’s first ever medal in women’s judo at the Olympics.

The 21-year-old sensation’s whirlwind year has continued with a place on the panel at the 30th edition of Miss Ukraine this week, as well as a stylish photoshoot for her homeland edition of the iconic periodical.

“I am basically very fond of shooting,” said Bilodid, sharing a black-and-white clip of herself posing for the session while describing her experience at Miss Ukraine as “interesting”.

“But when [I have] a team of professionals and each image is laid out in detail, then my happiness is [multiplied].”

Bilodid revealed that fans often ask her for the secrets behind achieving so much success at such a young age.

The Kiev-born star’s haul of honors includes two golds and a silver at the European Championships, gold at the European Games and 17 other medals at major senior competitions.

“This is a very difficult topic,” she said of her advice on mindset. “Each person is different and everyone reacts to the atmosphere of the competition differently.

“Some enter into a fighting mood at the right time, some at the wrong time, and some do not know how to enter it at all… this greatly affects the result for the worse.

“I believe that an athlete should be taught to compete from childhood – not only in small competitions in small halls, but to try to go to the international arena, to large halls with stands and the atmosphere of really serious competitions.

“Personally, it was so with me. From my childhood, I got used to competing abroad. My first competitions abroad were held in Budapest when I was eight years old.

“From that age, the coaches regularly began to accustom me to this format of competitions.

“Therefore, when I grew up and started performing in cadets, juniors and adults, it was easier for me.

“I calmly reacted to the atmosphere of the European and World Championships at a time when others were frightened by large halls and stands with fans.”

Treating all competitions equally is crucial, the ice-cool Bilodid believes. “It doesn’t matter if it is the European Cup or the World Championship,” she pointed out.

“And there, people like you participate – they have two arms and two legs. So take it easy and believe in yourself.

“Inspire yourself that you are the strongest. Everything comes from the head. I know from myself that your attitude depends only on you.

“I was never embarrassed by the age, titles and results of my competitors because I knew that I could win.

“The most important thing is to make every effort to [follow] this and then everything will work out.” 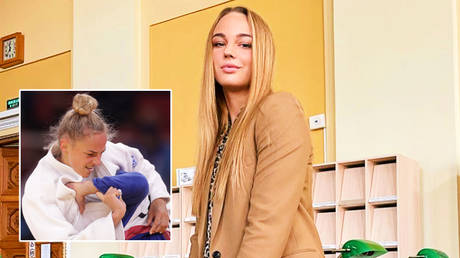