Erling Haaland has wowed football fans yet again with a stunning strike for Borussia Dortmund in the Bundesliga. Against Union Berlin, he lobbed the goalkeeper from the edge of the 18-yard box to send the Westfalenstadion wild.

Keeping the heat on leaders Bayern Munich, who they trail by just a point at the top of the table, Marco Rose’s men were leading the visitors 3-2 with less than 10 minutes to spare.

Helping to make it 2-0 earlier in the first half, Norwegian wonderkid Haaland later latched on to a long ball from his team’s back line.

Tussling with his marker, he managed to get on the right side of the pass to then let off a high, one-touch effort with his blessed left foot.

Goalkeeper Andreas Luthe was left to admire the 21-year-old’s work of art as it lobbed him, before then embarking on a helpless attempt to stop the effort which saw him crash into the ground before his own post.

Rising to his feet himself to celebrate with one finger to his ear and another pointing to the sky, a clip of the strike spread to social media and broke the internet.

There he was dubbed “crazy”, “insane” and the “best striker in the world”, while the Bundesliga’s official account was left “speechless”.

Best striker in the league

With the brace, Haaland made sure his goals tally (68) surpassed the total amount of games (67) he has played for the title hopefuls.

And through such performances week in, week out, his days at Dortmund, before a continental giant such as Chelsea or FC Barcelona snatch him up, appear to be numbered.

This season alone, he has hit the back of the net 11 times in just eight outings. 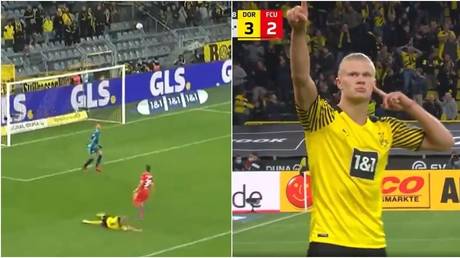