French F1 ace Romain Grosjean will be replaced by Brazil’s Pietro Fittipaldi for the Sakhir Grand Prix in Bahrain this weekend, the pair’s Haas team has announced, as Grosjean recovers from his horror crash on Sunday.

Grosjean is expected to be discharged from hospital on Tuesday after treatment to burns on the back of his hands which he suffered when his car smashed into a barrier during the Bahrain Grand Prix, splitting into two and bursting into flames.

Haas boss Guenther Steiner had said he would wait until visiting Grosjean in hospital to assess whether he would be fit to race again in this weekend’s Grand Prix at the same venue, and the team has now announced that Fittipaldi will take his place in what will be the 24-year-old Brazilian’s F1 debut.

“Grosjean sustained hand injuries during last weekend’s Bahrain Grand Prix and is unable to compete [this weekend],” a statement from the team read.

“After it was decided that the best thing for Romain was to skip at least one race, the choice to put Pietro in the car was pretty easy.

“Pietro is familiar with us having been around the team for the past two seasons as a test and reserve driver.

“It’s the right thing to do and it’s obviously a good opportunity for him. He’s been patient and was always prepared for this opportunity – and now it has come,” said team principal Steiner.

Brazil’s @PiFitti will make his Formula 1 debut with Haas F1 Team in next weekend’s #SakhirGP, subbing for the injured Romain Grosjean.

Fittipaldi, who is the grandson of two-time F1 world champion and double Indy 500 winner Emerson Fittipaldi, said he was relieved that teammate Grosjean was safe and well following his miraculous escape.

“We’re all very happy his injuries are relatively minor after such a huge incident,” said the Brazilian.

“Obviously, it’s not an ideal set of circumstances to get my first opportunity to compete in Formula 1, but I’m extremely grateful to Gene Haas and Guenther Steiner for their faith in putting me behind the wheel this weekend.”

Appearing from his hospital bed, the 34-year-old Grosjean had given fans an update on his condition on Sunday, seeming in good spirits as he showed his bandaged hands and praising the ‘Halo’ safety device fitted in all F1 cars for helping bear the brunt of his 140mph (225kph) smash.

The scenes were among the most terrifying witnessed on an F1 track in recent memory, and caused a 90-minute delay to the action at the Bahrain International Circuit.

This weekend’s racing will be held at the same venue and will be the penultimate Grand Prix of this season’s calendar.

Grosjean confirmed in October that he was set to leave Haas at the end of the 2020 season, with his F1 future in doubt beyond that.

The veteran Frenchman made his debut in the sport with Renault back in 2009.

There is no word yet on whether he could return to the Haas cockpit for a potential swansong in the last race of the current season in Abu Dhabi from December 11-13. 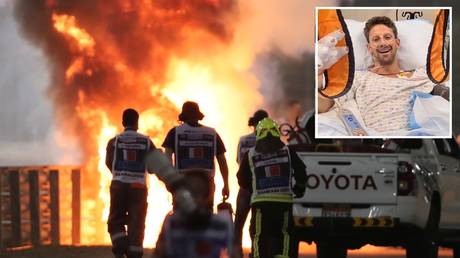