A football club is in mourning after doctors were unable to save 24-year-old Brazilian player Alex Apolinario, who was rushed to hospital and placed into a coma after suddenly collapsing on the pitch during a match on Sunday.

Attacking midfielder Apolinario dropped to the turf with less than half an hour gone while he was playing for Portuguese side FC Alverca, receiving treatment with a defibrillator for 25 minutes before being taken to hospital.

The club confirmed on Thursday that Apolinario had died in the Vila Franca de Xira Hospital.

In a statement, Alvera pledged to “provide all the necessary support” to Apolinario’s family and announced the cancelation of all the club’s forthcoming activities.

Players and staff had formed a prayer circle after the harrowing incident, and hopes had been raised by the news that Apolinario was in a stable condition later in the day.

Portuguese champions and Champions League contenders Porto shared their condolences, saying: “At this difficult time, FC Porto is with Alex Apolinario’s family and friends, as well as with everyone at FC Alverca.”

Former Porto and Portugal striker Fernando Gomes spoke of his “deep regret” at the tragic development.

“In such a difficult time and when football has suffered so many losses, it becomes even harder, more incomprehensible and unfair to have to accept the disappearance of a young man who should have had much more life ahead of him and the opportunity to continue to build his football career for which he fought so much,” he added.

We are all extremely saddened to hear about the tragic passing of Alex Apolinário, @FCAlverca player.

We would like to offer our deepest condolences to his family and friends at this difficult time. pic.twitter.com/AEb8TY4AYm

“In this hour of enormous pain, knowing that words can comfort little, I offer, in the name of Portuguese football… my deepest condolences.”

Nurtured at Cruzeiro’s academy, Sao Paulo-born Apolinario made seven appearances for the Brazilian side.

One of the highlights of his cruelly curtailed career came in 2019, when he scored for third-tier Alverca in a memorable 2-0 win over Portuguese giants Sporting Lisbon.

Ex-referee Pedro Proenca said: “Alex Apolinario was, like so many others, a young man looking to fulfill his dreams in football.

“His inanimate fall on the pitch doing what he enjoyed most in life is one of those moments that we never want to see again.” 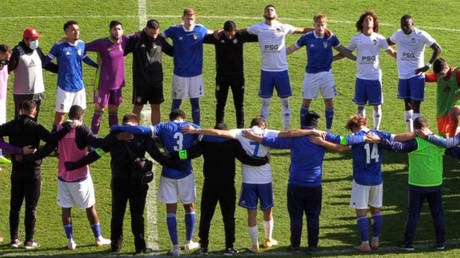