After heated debate online – which at stages broke out into open insults – the video games giant dropped the trailer for the new UFC 4 game on Saturday, revealing that Masvidal and Adesanya would share cover star status.

Shape your legend with #UFC4! 🎮

The timing is perfect for popular Miami fighter Masvidal as he prepares to face welterweight champion Kamaru Usman in their title bout at UFC 251 on the fabled ‘Fight Island’ in Abu Dhabi this weekend.

Footage from the trailer from the game – which comes out on August 14 – traces Masvidal’s roots from backyard brawls all the way to the top of his sport, including his record five-second destruction of Ben Askren along the way.

For New Zealander Adesanya, his cover status is also further proof that he has established himself as a bona fide megastar of the sport.

On Fight Island and on the cover 💪 Jorge Masvidal and Israel Adesanya are your #UFC4 Cover Athletes 🔥🔥🔥@GamebredFighter @stylebender pic.twitter.com/YHg81EMUax

Elsewhere, the trailer showed glimpses of undefeated UFC lightweight king Khabib Nurmagomedov – whom many had backed as being worthy of adorning the cover himself – as well as his Irish nemesis and former cover star Conor McGregor, now supposedly retired from the fight game.

Two-weight women’s legend Amanda Nunes also features, while world heavyweight boxing champions Tyson Fury and Anthony Joshua were revealed as playable guest characters in the game – to the delight of many.

The row over who should grace the cover had become increasingly fraught in recent weeks, with Khabib’s manager Ali Abdelaziz posting a mock-up version of his client on the cover, with the message: “This should be the new cover. This man never lost. I know who will be on the new cover. One is good but another has a double digit loses. EA sports people sucks.”

That drew a furious rebuke from Masvidal, 35, who shot back: “You should get off whoever’s d*ck you are hating on now. You talk a lot. That’s an understatement. You are a certified informant,” adding a rat emoji.

Masvidal’s popularity in particular has never been higher as he prepares for the biggest fight of his nearly two-decade career in the sport.

‘Gamebred’ stepped in at six days’ notice to take on Usman after initial opponent Gilbert Burns tested positive for Covid-19, setting up a fight that UFC boss Dana White said on Friday was among the most anticipated the promotion had ever seen. 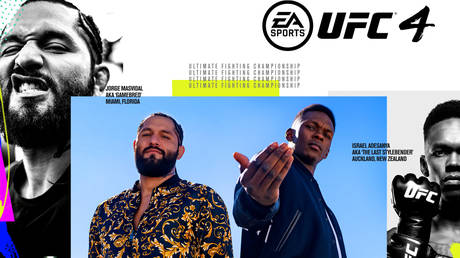 'His athleticism is extremely...