Having worn a watch worth $769,000 when he won last year’s French Open, Rafael Nadal has donned an even more extravagant accessory for the defense of his title this week – causing some connoisseurs to label the champ a show-off.

Slight tournament favorite Nadal’s new watch, which is worth $1,050,000, weighs 30g and is made from metal often used in cars as one of a limited edition of 50 to have been created.

The world number two will be back on court with the watch for the third round this afternoon, when he will aim to continue his perfect record so far at the tournament by securing another straight sets victory over Italian outsider Stefano Travaglia.

His watch can float in water and is “light enough to elicit laughter when placed in your hands”, according to specialist site Hodinkee, which says the design can endure “the incredible forces of life” on Nadal’s wrist.

it’s the fifth @Richard_Mille timepiece under his name and he’s been wearing several strap colors depending on the model since the partnership started in 2010 — grey last year but also yellow & red in previous editions. White at Wimbledon, of course. He let me take it for a ride pic.twitter.com/w0PiauGLiK

Nadal has previously been noted for his taste for luxury watches thanks to a lucrative partnership with Swiss brand Richard Mille, making headlines alongside NFL star Odell Beckham Jr last year as he won at Roland Garros on the same day that the wide receiver made his debut for the Cleveland Browns while wearing a make from the manufacturers worth $189,500.

Not everyone has been impressed with his current choice. “Anyone spending that cash on [this watch] needs shooting,” blasted one visitor to Hodinkee, calling the edition “overpriced garbage”.

“But to be fair, Instagram is full of idiots just desperate to show off expensive crap.”

Marketing-savvy Nadal subtly promoted the watch ahead of the tournament last week, tagging the brand into one of his Instagram posts as he looked at his wrist during practice in Paris.

Imagine what he wears when he goes out to dinner or parties? pic.twitter.com/FdOmnH3fBo

Great ad for Richard Mille. Well, at least to those who can afford it

Would you buy a Red Richard Mille Nadal that looks like a $20 watch from target (USA) or Argos (UK)?

Asking for a friend. JJ

The Spaniard, who has just been named 27th in Forbes’s annual list of the highest-paid athletes in the world, tagged the likes of sportswear giant Nike and car manufacturer Kia into his subsequent post as part of a lengthy endorsements list that is thought to earn him $26 million every year.

Some fans reacted with jealousy while others could not resist making fun of Nadal’s ostentatious new acquisition.

“Thinking about how Nadal’s watches are over $1 million and he literally wears them to play tennis,” laughed one.

Another said: “Imagine what he wears when he goes out to dinner or parties.” 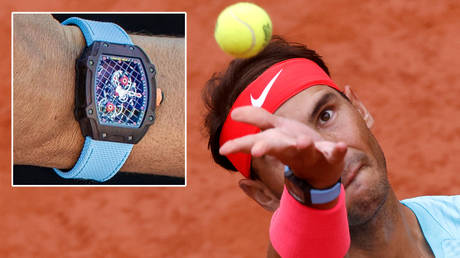