Former NFL MVP Cam Newton has claimed he is “tired of being humble” and appeared to lash out at former team Carolina Panthers in an expletive-ridden gym rant that ended with him calling himself the king of the jungle.

Filming himself half-naked and covered in sweat during a gym session, the 31-year-old, who has previously launched his own clothing label and cigar bar and restaurant, said he had been modest for too long.

In a message to his former team, the three-time Pro Bowl winner appeared to criticize Terry Bridgewater, Panthers’ new quarterback, by asking: “You going to choose that over this?

“I’m really a monster but I’m going to say this: I’m getting tired of being humble now.

Father-of-seven Newtown has just signed for New England Patriots after a turbulent start to the year in which he reportedly split from long-term partner Kia Proctor and was released by the Panthers.

He fathered a child with Instagram model La Reina Shaw last summer, and the social media site was his platform of choice as he filmed himself grimacing while performing sit-ups in a series of two clips posted to his following of more than 4.5 million.

“The hyena, they’ll be doing all what they do,” he explained, breathing heavily as he shouted into the camera while a man to his left watched on from a bench.

“The elephant, they’ll be doing what they do. The giraffe, the antelope, the chimpanzee, even the gorilla. But there’s one motherf*cking animal in the jungle.

“When he roars, everything stops. And I’m about to motherf*cking roar.”

In an accompanying “note to self”, Newton called himself “the best”, “a dog”, “a monster” and “the lion”, concluding: “Never let ‘them’ make you affect you.” 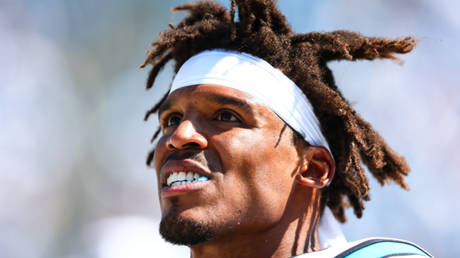