Dramatic photos have shown the submerged wreckage of a luxury orange car owned by Arizona Cardinals wide receiver Jermiah Braswell, who told police that he was “stuck” and did not know how he had crashed into a lake at high speed.

The NFL rookie was arrested for driving under the influence after he was found trying to steer his Chevrolet Camaro forward while complaining of being “stuck” in Lake Erie, police reports said.

Witnesses reportedly saw Braswell speeding the striking vehicle along a road and through a grassy area before it flew off an embankment and landed in the water.

Braswell was said to have been unable to explain how the car ended up there while slurring his speech in front of officers who were called to the early-evening scene.

Put-in-Bay PD confirms the man who crashed his Camero into Lake Erie earlier today is Jermiah Braswell, a Toledo native who played football at YSU & recently signed with the Arizona Cardinals. Police say he was drunk & speeding when he flew off an embankment into the lake. pic.twitter.com/PhurCfX3KY

Sources say the car is still in the water tonight. pic.twitter.com/8EN1Yx6kos

The car remained trapped between a rock and the waves on Sunday night, sources told local news station Cleveland19.

Braswell, who only joined the Cardinals as a free agent at the end of April, exceeded Ohio’s legal limit for blood alcohol content but refused to submit to a chemical test, according to the Port Clinton News Herald.

No passengers were in the car and the Cardinals are yet to release a statement on the incident. 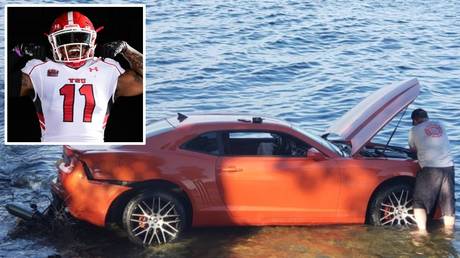 Holidays back on as Gov confirms i...