Close
Trending News
HomeSport‘I’m struggling to make it flatter’: Russian Olympic champ Chigireva bemoans that her bum is too BIG for synchronized swimming

‘I’m struggling to make it flatter’: Russian Olympic champ Chigireva bemoans that her bum is too BIG for synchronized swimming

‘I’m struggling to make it flatter’: Russian Olympic champ Chigireva bemoans that her bum is too BIG for synchronized swimming

Russian Olympic synchronized swimming champion Vlada Chigireva has revealed she’s been suffering from an unusual problem: trying to get rid of her well-rounded backside which she says hinders her in the water.

Unlike women who spend hours in the gym attempting to build up strong butt cheeks, Chigireva applies her efforts to make her buttocks smaller.

READ MORE: ‘Hairy legs are the key to success’: Synchronized swimming champ says they DON’T SHAVE one week prior to competition

The 25-year-old champion complained about her struggles on social media, stressing that her “curvy figure” creates difficulties in her sporting career.

“I inherited a gorgeous body shape from my parents, but in sport these curves can really bother you. While the majority of women are trying to bulk up their buttocks, I’m struggling to make them flat,” the swimmer wrote.

She also shared a video showing exercises which help to solve to her ‘problem.’

Chigireva and the rest of her teammates resumed full-time training in June after a lengthy hiatus caused by the Covid-19 crisis.

The swimmer, who possesses 11 world and three European titles, in addition to Olympic gold, is getting ready to defend her title at next year’s Summer Games in Tokyo.

Russia’s ‘mermaids’, as the country’s synchronized swimmers are often called, have been unbeaten on the international stage for 20 years since winning at the 2000 Summer Olympics in Sydney. 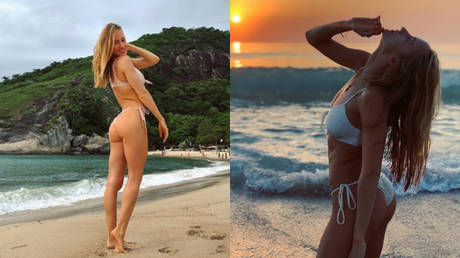