‘I’m right here with you’: LeBron James backs Bubba Wallace over ‘HATE from the president’ as NASCAR star continues row with Trump

‘I’m right here with you’: LeBron James backs Bubba Wallace over ‘HATE from the president’ as NASCAR star continues row with Trump

NBA great LeBron James has told the next generation of sports stars to choose “love over hate”, endorsing a comeback from Bubba Wallace after US president Donald Trump accused the NASCAR racer of faking a noose found in a garage.

Trump told Wallace to apologize and alleged that his apparent discovery of a noose in his racing garage had been a hoax, issuing a typically angry tweet that was partly in response to the driver influencing NASCAR’s decision to ban the Confederate flag from races.

NASCAR’s only full-time black driver reacted by telling his hundreds of thousands of fans to “walk proudly on the path you have chosen”, adding that “haters” such as Trump only served to elevate their voices and platforms.

“Love should come naturally as people are taught to hate,” said the high-profile supporter of the Black Lives Matter movement that has organized protests in the US since the killing of George Floyd at the hands of police brutality in May.

“Even when it’s hate from the POTUS. To the next generation and little ones following my foot step, love wins.”

Three-time NBA champion James offered his enthusiastic support to Wallace, writing: “Right here too with you, as well as the next generation who follow in my footsteps. Kings and Queens.”

James also welcomed the decision by rapper and activist Dr Dre’s Beats by Dre business to announce a deal with Wallace.

“We weren’t going to announce this until later this week, but hate cannot win the day,” said the company, publishing a photo of Wallace in a t-shirt bearing the Black Lives Matter slogan and the words “I can’t breathe” – the plea made by Eric Garner, an unarmed black man who was killed in 2014 after being put in a chokehold by New York City Police.

“No-one should ever be asked to apologize for standing up for what’s right.”

Right HERE too with you!! As well as the next generation who follows in my foot steps! Kings and Queens https://t.co/6rO5cex3ed

Cynics put the deal down to “opportunistic profiteering”, with a Trump fan writing: “No amount of money will buy respect. Hoax.”

“Who says hate crime hoaxes don’t pay?” asked another, while a Democrats supporter replied: “Trump never apologizes for any of his wrongs.

“How dare he demand an apology from someone for doing what’s right?” 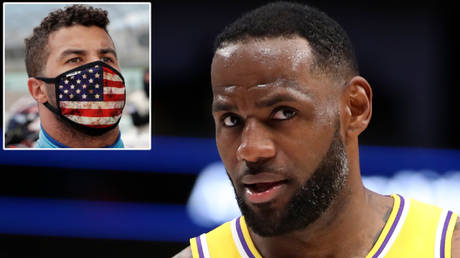