‘I’m right here’: UFC star Cowboy Oliveira calls for ‘the fight no one else wants’ against rising sensation Khamzat Chimaev

‘I’m right here’: UFC star Cowboy Oliveira calls for ‘the fight no one else wants’ against rising sensation Khamzat Chimaev

UFC veteran Alex ‘Cowboy’ Oliveira says that he wants to duel surging welterweight sensation Khamzat Chimaev, as a host of the division’s bigger names distance themselves from a showdown with the undefeated ‘Borz’.

Chimaev has been near perfect in his UFC run thus far since making his debut on the first iteration of ‘Fight Island’ this summer, where he defeated both John Phillips and Rhys McKee within just 10 days of each other.

A 17-second knockout of another veteran fighter, Gerald Meerschaert, followed last month handing the Chechen-born Swede Chimaev a UFC record third win in 66 days – all while absorbing a total of just two strikes.

The 26-year-old’s performances in the cage demand an uptick in competition but with UFC boss Dana White suggesting that Chimaev’s next fight will likely be a main event, few fighters have as yet put their hand up to be the second man in the cage.

Former two-time welterweight title contender Stephen ‘Wonderboy’ Thompson referenced the Chimaev fight to which he is linked on his podcast recently, saying that it doesn’t make sense for him to risk his spot in the top five rankings to the as-of -now unranked Chimaev.

Another contender, England’s Leon Edwards, has also indicated that he isn’t interested in fighting Chimaev – despite not having competed in the cage since July 2019.

Step forward Alex ‘Cowboy’ Oliveira. The Brazilian veteran is currently riding a two-fight win streak in the UFC’s 170lbs division and says that he is the man to end Chimaev’s recent purple patch.

“I’ll take the fight no one else wants,” Oliveira said to MMA Junkie. “Chimaev, I’m ready for a fight at welterweight right now. I see you picking and choosing opponents. I’m right here.”

Oliveira is consistently one of the more entertaining fighters in the UFC currently. Much like his American UFC namesake, he comes to the cage (often while salsa dancing) sporting a cowboy hat and is equally adept with his submission skills as he is on the feet.

What’s more, Oliveira would be a sturdy test of Chimaev’s mettle as he attempts to move up the rankings and secure the type of fights which would place him into world title contention, while also placing ‘Borz’ in the types of situations which have been entirely absent from his last three walkover performances.

“I’m itching to fight Chimaev,” he added. “If you want to pick and choose opponents, I’ll fight you.” 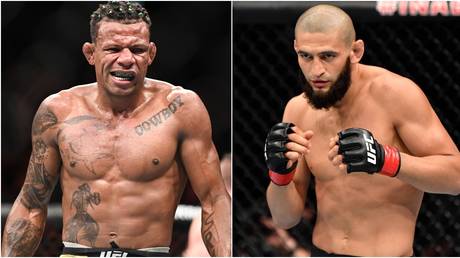