Close
Trending News
HomeSport‘I’m not messing around’: Maria Sharapova back on court as fans told to don masks ‘even if you look like DARTH VADER’

‘I’m not messing around’: Maria Sharapova back on court as fans told to don masks ‘even if you look like DARTH VADER’

‘I’m not messing around’: Maria Sharapova back on court as fans told to don masks ‘even if you look like DARTH VADER’

In an action-packed series of snapshots of her glamorous life in quarantine, Maria Sharapova has shown herself playing tennis, working out, battling crows in her garden, relaxing on a boat in California and wearing a mask.

A huge fan of celebrity trainer Tracy Anderson, former world number one Sharapova pictured herself with her head on the floor of her California home and one leg in the air during one of her frequent workouts.

The 33-year-old, who also revealed that she had been on a trip to a luxury hotel with art dealer boyfriend Alexander Gilkes, then pictured one of the heavy rings she works with while honing her physique.

“Not quite sure what I was doing here but it was some ridiculous move from Tracy’s class,” she said of Anderson’s training, before looking at the weight and saying: “I know this looks fun.

Heading out for a spot of tennis, Sharapova reflected that “no-one sweeps the court for you in retirement” but seemed pleased to be back playing the sport in which she won every Grand Slam during a glittering professional career.

She then showed herself leaping into the air at a beauty spot, drinking out of a coconut, driving her car and relaxing on a boat in the sun.

“Never have I taken this many road trips or taken this many hikes,” she said, interspersing her panoramas with photos of a vintage bottle of champagne from a trip to Hawaii last year and a glass of wine as she sat at a table.

At the top ⛰, don’t forget to put a little extra work into it. 💨😰#DoNutStop #FitAndLit

Sharapova’s gardening experiences seem to have been less smooth. Her attempts to grow tomatoes have been hampered by crows, forcing her to protect her produce with stapled bags.

Ending on what she sarcastically admitted was a “terrific note”, Sharapova donned a black mask to prevent the spread of Covid-19 and told her following of more than four million: “Please wear a mask, even if you look like Darth Vader.

“If not for yourself, please do it for others.” 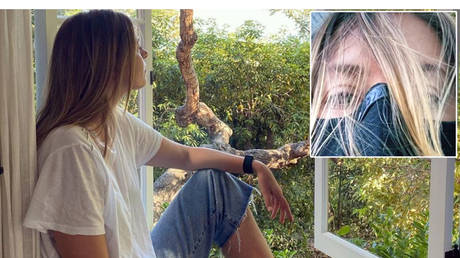 Free breakfast and after school ch...