Premier League winner Jens Lehmann has opened up about his WhatsApp message shame that caused him to be sacked from a German team’s board, apologizing unreservedly while insisting he meant no harm by remarks construed as racist.

Former Germany goalkeeper Jens Lehmann was dismissed from his supervisory role at Hertha Berlin in May after the details of a message he accidentally sent to fellow ex-international Dennis Aogo, in which he called the pundit for Sky Sports in their homeland a “token black guy”, became public.

Top-flight side Hertha distanced themselves from the hero of some of Arsenal’s greatest Premier League triumphs, saying that his words went against their “values” and “campaigns”.

“I have to admit, I’ve never dealt with the subject in such depth before – with discrimination, with systemic racism and colonialism,” Lehmann told Die Zeit, via translation, according to a Bild report that said the 51-year-old had lost business partnerships before deciding to stay away from the public eye since the scandal.

“And I was also concerned with the question of how I came to use the term ‘token black’.”

“I don’t want to try to justify myself at all. I can understand anyone who has found the word disrespectful.

“I apologized for that and I’ll do so again here: I made a mistake because that word probably made people feel offended – even people who don’t have the opportunity to tell me.”

Lehmann is said to have received abuse – particularly online – and criticism even from those close to him.

“In my private life I also got a lot of messages and calls,” he explained.

“And the majority of those people said, ‘you weren’t exactly smart but we’re all totally insecure [about it]. We no longer know how to say what, although we mean well.’

“I am not sitting here to beg for pity. I believe that everyone has to decide for themselves whether they had to jump on the bandwagon here or whether it was something private between me and Dennis Aogo.”

Shocked Aogo posted a screenshot of Lehmann’s message on his Instagram story shortly after receiving it, tagging the sender and writing: “Wow – are you serious? This message wasn’t supposed to go to me, I guess.”

Responding at the time, Lehmann said: “In a private message from my mobile phone to Dennis Aogo, an impression was created for which I apologized in conversation with Dennis.

“As a former national team player, he is very knowledgable and has a great presence.” 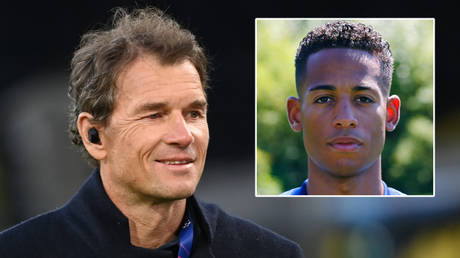