Kutateladze battled back and forth with former two-division KSW champion Gamrot over the full three-round duration as both men made their octagon debuts.

The matchup saw both men have their successes, with Kutateladze impressing with his striking, while Gamrot used his wrestling skills to land multiple takedowns through the course of the fight, which saw both men earn $50,000 “Fight of the Night” bonuses.

But, by the time the pair had battled to the scorecards, the judges were split on who won, as Kutateladze edged a split-decision verdict that even he didn’t agree with.

“It was your fight.”@Guram_DZE with an amazing showing of respect & honesty post-fight.

However, while he wasn’t comfortable with the ending to his debut, Kutateladze is setting his sights high, and threw his hat in the ring to fill the vacancy on the UFC 254 fight card and fight Russian lightweight contender Makhachev, who was left without an opponent when former lightweight champion Rafael dos Anjos was forced off the card after testing positive for COVID-19.

Speaking to reporters, including RT Sport, backstage after the event, Kutateladze, said, “I know that Islam Makhachev doesn’t have an opponent next weekend. I’m here and I’m ready to fight.

“Maybe I’m gonna rest this evening, I’m gonna rest tomorrow and the day after that I’ll get to work again and start dropping weight again. I’m not stupid, he wants probably top 15, top 10 guys and and I’m like the new guy. But still, if something (happens), I’m here, and I’m ready.” 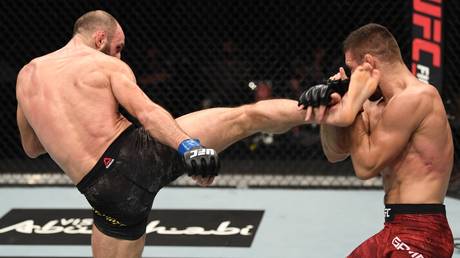