‘I’m going to be sick’: Fan horror as fighter screams in pain after excruciating kneebar from Russian star heading for UFC (VIDEO)

‘I’m going to be sick’: Fan horror as fighter screams in pain after excruciating kneebar from Russian star heading for UFC (VIDEO)

An MMA fighter made his opponent scream in agony with a gruesome first-round kneebar submission on UFC president Dana White’s Contender Series, earning himself a contract with the world’s most high-profile promotion.

Unbeaten Russian prospect Gadzhi Omargadzhiev secured one of the most agonizing-looking conclusions to a fight this year by beating Brazilian Jansey Silva on the showcase of talent chasing a place in the UFC by suitably violent means.

Fighting at the UFC Apex in Las Vegas, Omargadzhiev had been well on top of victim Silva when he made his opponent’s leg bend in horrific style, causing familiar UFC referee Herb Dean to become a concerned onlooker.

The action was over inside the first round when an understandably distressed Silva was unable to continue, wincing in pain as he lay flattened on the canvas.

As Dean waved proceedings off after Silva tapped out, a medical team moved in to attend to the stricken fighter – leaving fans unable to contain their shock at the savaging they had seen.

“Good lord,” said one account sharing the fearsome footage, adding a “holy sh*t” for good measure with a post showing an alternative view of the vanquishing.

“I’m going to be sick,” added another, reacting to the compellingly gruesome conclusion in which Silva could be said to have shown commendable fortitude.

Omargadzhiev is getting a contract. Very impressive!

Omargadzhiev, who had pledged that his “time has come” beforehand, could be back at the Apex before long.

Boasting a flawless record as a professional, the 28-year-old has now been handed a deal by the UFC – and fellow middleweights are certain to either view the clip as a cautionary tale or a finish to be viewed from behind the sofa.

The former combat sambo world champion has ended ten of his 12 fights prematurely, including eight knockouts.

He suggested he had signed a four-fight deal with the UFC, and his Octagon debut was a devastating way to announce his arrival with White’s juggernaut.

Silva sounded a reassuring note despite the nature of his defeat to his Paris-trained adversary.

“A rough night, but that’s OK,” he told his fans on social media. “Only those who have lived understand. Very grateful for all the love and affection I received in the messages – I love you so much.” 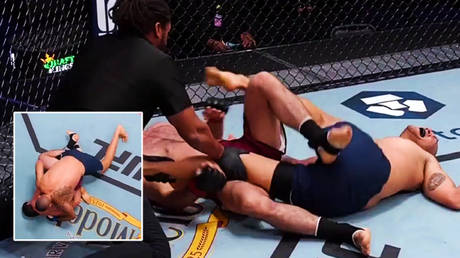 Brits to be hit by highest taxes i...