Khabib Nurmagomedov may be about to face Justin Gaethje in his next bout, but there’s one fight he wants more than any other – a bout with former UFC welterweight champion Georges St-Pierre.

Speaking at the launch of his own MMA promotion, Khabib revealed that not only does he want to face St-Pierre, he has also received indications from the UFC that they are prepared to negotiate with “GSP” if Khabib gets past Gaethje later this year.

“If (St-Pierre) comes back to the UFC and agrees to fight me, I’m fighting him,” he said.

“Why? Because the last time he lost was 2007. My career started in 2008. Together we’ve been undefeated for 25 years. I’m talking in terms of time, not fights.

“I don’t think the UFC will get another chance to make a fight like that, definitely not in the next 10 years. So, Georges St-Pierre is next. If not, then let Conor (McGregor) beat (Dustin) Poirier or have Tony beat him, then I’ll fight them.”

Rather than Khabib trying to force the UFC’s hand, the Russian superstar revealed that the UFC has said they will look to strike a deal with St-Pierre after Khabib has faced Gaethje.

“If I beat Gaethje, then in April I could fight St-Pierre,” he said. “(The UFC) told me that they will negotiate with St-Pierre.”

Another big-money fight option could be a matchup with undefeated boxing great Floyd Mayweather, who is thought to still be keen on facing Khabib under boxing rules.

But “The Eagle” said he isn’t interested in breaking his contract with the UFC to face the 50-0 former world champion.

“I am still offered a fight with Mayweather, despite the contract with the UFC,” he stated.

“They are even ready to pay all the penalties, because the UFC will have to sue. But I have a contract with the UFC, and this is more important than money.” 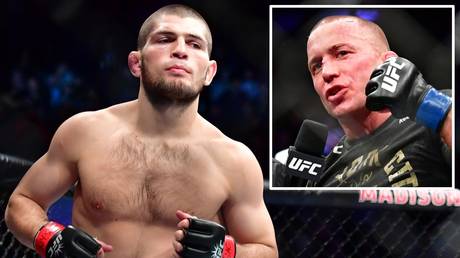