Tyson Fury has issued a menacing new message to the man he dethroned as WBC heavyweight boxing champion earlier this year, growling at Deontay Wilder during a gym workout while preparing for their trilogy fight later this year.

Fury announced he had enjoyed a productive sparring session with fellow Lancastrian and former featherweight champion Isaac Lowe, as he looking trim as he carried out a set of cable chest presses behind a metal fence in a weights room at a fitness center near Liverpool.

The unbeaten British giant snarled at the cameraman before growling: “Wilder, I’m coming for you, sucker,” and roaring as he let the cables go.

“Two sessions down today,” he later revealed from the comfort of his home sofa.

“I absolutely smashed 12 rounds of boxing and did a four-mile run.”

He then demonstrated that his enforced absence from the ring has not stopped him from indulging in his passion for singing, performing a cheery singalong to “Ain’t No Stoppin’ Us Now”, the 1979 disco hit for duo McFadden & Whitehead.

The floor-filler was the ring music used by former opponent David Haye, who Fury had been due to face in 2013 before Haye’s shoulder injury denied Fury the chance to hear the song played before a fight between the two bitter rivals.

Haye revisited his rancorous relationship with Fury earlier this year when he argued with his notoriously uncompromising father, John, about his chances of beating Wilder while they were working together as television pundits.

Former heavyweight champion Haye doubted Fury’s chances against the previously unbeaten “Bronze Bomber,” but the 29-year-old made a mockery of his predictions and the close-fought draw he shared with Wilder in 2019, coasting to a seventh-round knockout victory in Las Vegas.

Many fans had felt that the ease of Fury’s win meant there was little point in a third fight, which could happen in December after Wilder activated a clause in the promotional agreement for a rematch.

Ya gotta love the Gypsy King. He’s got that loveable loony pyscho look in his eyes like he’s been eating batteries again 🤣🤣🤣

Notice how Wilder was active on twitter almost every day up until the fight but literally has gone missing since!

The BronzeBomber is coming for you Mr fury

The Alabaman almost knocked Fury out in their original meeting before looking a shadow of himself in his first defeat, suffering scorn from fans after claiming that his heavy walk-on costume had been responsible for his defeat and derision when his brother later alleged that Fury’s gloves had been loaded.

Fight promoter Frank Warren was clearly pleased by the footage of Fury joking around in the gym, calling his fighter a king in response.

MTK Global, who represent Fury and have been at the center of talks about a possible superfight with fellow champion Anthony Joshua that could net both fighters around $125 million, also offered their approval.

“He’s got that lovable loony psycho look in his eyes like he’s been eating batteries again.”

While one Wilder critic claimed that the American had “gone missing” in comparison to his frequent boasts in the build-up to the second fight, another warned Fury, “The Bronze Bomber is coming for you.” 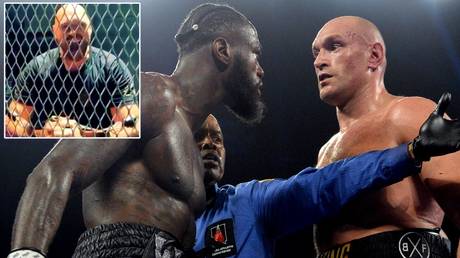