‘I’ll see you after the game!’ Antonio Conte reacts FURIOUSLY as Ever Banega mocks his HAIR during Europa League Final (VIDEO)

‘I’ll see you after the game!’ Antonio Conte reacts FURIOUSLY as Ever Banega mocks his HAIR during Europa League Final (VIDEO)

The lack of fans inside Cologne’s RheinEnergieStadion certainly didn’t diminish the testy nature of Friday’s Europa League Final, with one particularly aggressive exchange between Antonio Conte and Ever Banega caught on camera.

A thrilling final was eventually decided by a late Romelu Lukaku own goal handing Europa League specialists Sevilla a 3-2 win against Inter Milan – their sixth tournament win since 2006.

The game was marked by a spate of on-field incidents, particularly early in the game when referee Danny Makkelie opted to not send off Sevilla defender Diego Carlos for a last-ditch foul on Lukaku in the incident which saw the Milanese club take an early lead from the penalty spot.

Carlos was then instrumental in Sevilla’s winner, forcing Lukaku to deflect the ball home after sending an overhead kick towards Samir Handanovic’s goal with 15 minutes remaining.

Things got HEATED between Ever Banega and Antonio Conte 😳

The Sevilla player appeared to make fun of Conte’s hair…

Conte said “I’ll see you after the game!” 👀#Club2020 pic.twitter.com/PxAdcssGZa

However, one of the game’s more interesting scenes took place on the sideline.

After Conte made clear his opposition to a refereeing decision, Sevilla’s Banega appeared to mock the Italian coach by running his fingers through his own hair and allegedly said: “Let’s see if that wig is real!“

Following the final whistle, Conte was captured on the broadcast speaking to and pointing in the direction of Banega but took a more contrite approach when interviewed by the media.

“As you know very well, altercations do happen,” he said.

“When you finish the game, you finish all the situations. I wish Sevilla the best because they won and we’ve got great respect for the winner.” 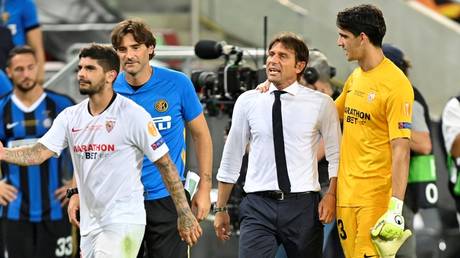