Khabib Nurmagomedov says continuing his intense training has helped take his mind off his father Abdulmanap’s health battle as the UFC lightweight king vowed to return in the autumn to defend his title.

Speaking on Russian state television, Khabib confirmed that his 57-year-old father remains in a serious condition in a Moscow hospital after suffering heart complications arising from a Covid-19 infection.

READMORE: ‘I hold his hand & ask if he recognizes me’: Khabib warns of ‘tough recovery’ for father Abdulmanap after Covid-19 stroke

Despite fears over his father’s health, Khabib says he has maintained his training regime, saying it is what Nurmagomedov Sr would want and even helps raise a smile during hospital visits.

“I’m training every day, preparing, because I know my father would want me to stay in shape and not stop training because of him,” Khabib said.

“When I visit him I always tell him, ‘I’m training every morning and evening, I’m in good shape’, and I see a smile appear on his face.

“Training helps me get rid of the stress, take my mind off everything.

“What am I training for? I’ve trained all my life. As my dad always said, ‘There’s always an arena for a well-prepared horse to perform’.

“So, I think I’ll return in autumn to defend my title.”

Khabib is widely expected to return later this year to defend his title against interim champion Justin Gaethje, who defeated Tony Ferguson in their showdown at UFC 249 to earn a shot at the undefeated Dagestani.

Speaking about the coronavirus situation in his Dagestani homeland, which had been described as especially severe, Khabib said the worst was at least behind them.

“The peak is behind us, I was affected by the peak myself, my father is ill, a lot of my relatives were ill, some of them are no longer with us.

“Of course, the situation has stabilized, it’s getting much better.

“But a month ago it was a really tough situation, not just for Dagestan but for the world… and we weren’t prepared for it.” 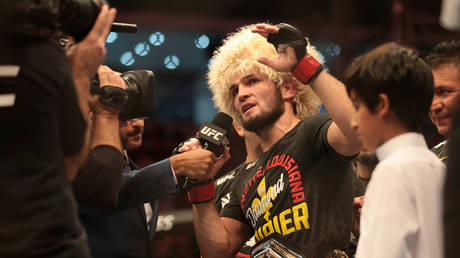