Russian’s Petr Yan says he plans on accepting any and all challenges during his reign as the UFC bantamweight titleholder, and even opened the door to a potential showdown with former two-division ruler ‘Triple C’ Henry Cejudo.

Yan, who defeated Jose Aldo by fifth-round stoppage to claim his first UFC title on ‘Fight Island’ on Saturday night, now finds himself in the position that every new champion does: namely, having to adjust from being the hunter to the hunted.

A rogue’s gallery of fighters in the UFC’s bantamweight fold – arguably the toughest division in the organization at the moment – will now be squarely focused on mounting a challenge for the vacant championship the Russian won in Abu Dhabi.

Before any talk of future challengers though, Yan took a moment to reflect on what was – by far – the biggest win of his career to date.

“I’m insanely happy to win this belt in such difficult times. It was my longterm goal,” he told the media immediately after his fight.

“Everything went excellent. We knew it was going to be a tough fight but I had everything perfect. I saw that I hurt him in the first round but I knew because it was five rounds that I cannot rush, I cannot make mistakes.”

However, ‘No Mercy’ didn’t have it all his own way. UFC legend Aldo, who once embarked on a decade-long winning streak in mixed martial arts, had no intention of surrendering what will likely be his final UFC title opportunity with a quite literal fight, and found success on the feet in the second round.

“In the second round he decided to pressure me, so I decided to let him work, to make him miss a few times and provoke him more to make him tired,“ he explained.

“It was my game plan to finish him in the later rounds. My team told me to be patient, just feint more, make him miss and he will go for broke in the final rounds. After that, you will finish him.“

‘What do you call him? A prostitute?’@PetrYanUFC addresses @HenryCejudo comments after becoming Russia’s new UFC champ #FightIsland #UFC251 pic.twitter.com/cxdEK8LssZ

The stoppage, when it came, was merciful. However, numerous observers – including Dana White – suggested that referee Leon Roberts could have stopped the fight earlier and saved Aldo from a barrage of unanswered punches on the ground.

“I think everything was right,” he said. “It was a championship fight between two warriors, so to not leave any questions behind… you know, the referee made this choice.

Immediately after Yan was declared the bantamweight champion the last man to hold the belt, the now retired Henry Cejudo, suggested online that he could return to claim what was once his. It is a challenge that Yan says he welcomes.

Congrats precious @PetrYanUFC 💋 but you absolutely suck! You’d be lucky to make it past two rounds with triple c! You ugly potato 🥔 #rentachamp

“They can say whatever they want now, it’s my time. I will fight anyone and I will beat anyone.

“I want to take rest now, recover and go back to my homeland to see my family – then it is the work of my management team. In my first 18 months I had six fights and never said no to an offer. Probably you will find out soon. I think October will be a perfect time.” 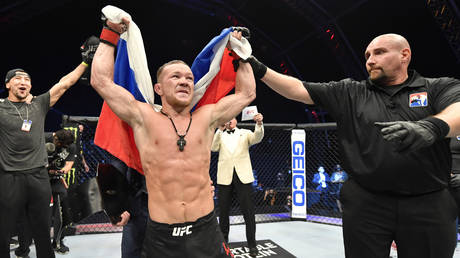 Azerbaijan says 2 of its troops ki...

‘Maybe he could make his own sequel’: Creator of Netflix hit ‘Squid Game’ hits back at LeBron James criticism with killer comeback